Comply with the police! (VIDEO)

It seems like such a simple question, so I’ll ask it… what ever happened to common sense in this country of ours? The reason I’m asking it this time is that, following the debacle in Ferguson, Missouri, once again, we are seeing clueless twits with their hands in the air violently protesting “police overreach”.

It’s such a simple concept, yet it appears to be escaping so many young men. If Michael Brown had simply complied with Officer Wilson that day, he most likely he would still be around today to rough up more defenseless convenience store clerks. But, why listen to the white cop?

Now we have this incident in New York City: another dead man who just didn’t want to comply with the white police. Said police were trying to question Eric Garner, who was on probation for a criminal conviction and who had a previous record, on the streets and, when he did not comply, they attempted to arrest him. The result was that more police showed up, and inevitably, Garner hit the sidewalk.  All of this was caught by a cell phone camera, including Garners pleas that he could not breath.

Officer Daniel Pantaleo was subsequently accused of using an “illegal choke hold” on the subject, in order to subdue him. Ultimately Garner, who suffered from health problems including asthma, died after being transported to the hospital. It’s apparently against NYPD regulations to use choke holds on people (though the police union maintains that the Officer Pantaleo used a takedown move taught throughout the NYPD), but not against state law in New York.

Yet another grand jury was convened to try to indict a police officer, but they could not find enough evidence of improper procedure to do so. You see, despite the emotionally charged nature of the notorious video of the incident, when a great big guy like Garner fights with the police, or even a smaller guy like Michael Brown, we realize as a society that extra force may be needed to take the subject into custody.  We realize that we have to grant police this liberty in order to maintain our own. 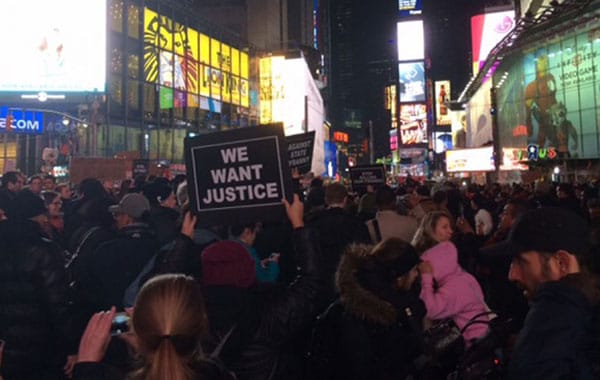 A protest in Time Square over the death of Eric Garner while being detained by police.

Now lets say Brown had been successful in taking control of officer Wilson’s pistol.  We would likely be mourning the death of yet another police officer–if we even knew about it. My guess is that there wouldn’t be a word from the White House or the Department of Justice. The “Reverend” Al Sharpton would finally be quiet, as would Jesse Jackson and the liberal media, without a narrative to sell that fits their agenda.

But as we all know that isn’t what happened.  Officer Wilson, after being beaten by Brown, fought back, and Brown was shot and killed. The result was all hell broke loose on the streets of Missouri.

Garner refused to comply with the police, was forcefully taken to the pavement, and, as a result of a combination of his noncompliance and his unique medical condition, of which police were aware, he died.  His death gave folks like Sharpton a renewed energy to voice their (in my honest view) racist nonsense. I say racist, because I never catch these pundits saying a word when there is black-on-black violence that leads to death–which, compared to other crimes like police brutality, is astronomical. They are as quiet as mice on this issue but never miss a chance when the perpetrator is white. That’s the worst kind of racist in my opinion–someone who denies the obvious, yet screams the loudest when it fits their agenda.

I worked in law enforcement for most of my adult life and I know that racism exists in police departments.  But in over four decades of police work, I can say that I never once saw an incident of racism within my ranks. I’m not saying that it doesn’t exist, not at all, but in my long police career, I didn’t personally witness any officers acting with racist intent in the field.

And, yes, in the performance of my duty I did hurt some people physically because they were resisting arrest, both black and white people. It was not to teach these people a lesson or administer justice, it was because they were resisting arrest and, more often than not, it was I who suffered an injury in the line of duty. From what I remember, that held true for almost every one of my former colleagues.

So here is my advice. If the police are wrong in their arrest, the likelihood is that the person arrested will be soon set free, that the officer/s involved may be fired, and that the person who was arrested could sue the municipality involved and heap an enormous financial reward. But, in the meantime, just flipping comply with the orders of the police, and stop acting like a bunch of juvenile delinquents.