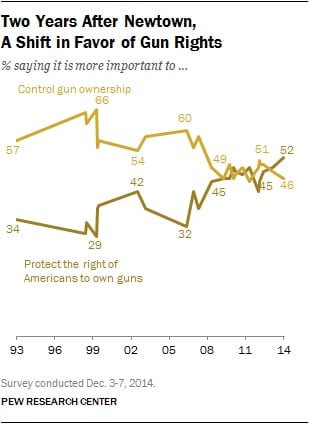 For the first time in 20 years the American public favors gun rights over gun control, according to a study by Pew Research Center released Wednesday.

The poll, surveying more than 1,500 people of voting age across all 50 states by phone, shows the coveted women and minority demographics tipping the scales.

Fifty-two percent think it’s more important to protect gun rights of the American people compared with 46 percent who said controlling ownership is more important, according to the survey.

Support increased by seven percentage points and gun control support decreased by five points from a Pew poll in January 2013. 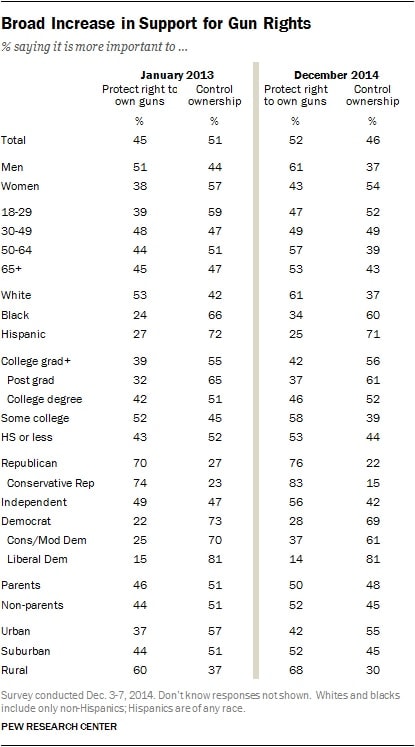 However, according to Ladd Everitt, a spokesman for the Coalition to Stop Gun Violence, it is likely not so much that more Americans actually favor gun rights over gun control as it is the specific wording used by Pew during the survey skewed the answers.

“The notion of having ‘rights’ is certainly going to be more appealing than the notion of being ‘controlled,’ no matter what topic you are asking respondents about,” Everitt said in an email to The Washington Times. “We’d be curious to see how the polling would look if Pew Research asked respondents if they believed they had ‘a right to be free from gun violence in their communities through the enactment of sensible gun legislation.’”

But other recent polls, with different wording, have found similar results. An October 2013 Gallup survey showed that support of gun control was waning – a trend which has apparently continued over the last year.

Additionally, Pew found that the number of Americans who think owning a gun protects people from becoming victims far outweighs the number who feel gun ownership puts others at risk.

Comparatively, a Gallup poll conducted last month showed a similar sentiment, with 63 percent of Americans now believing a gun in the home actually makes it safer, not more dangerous.