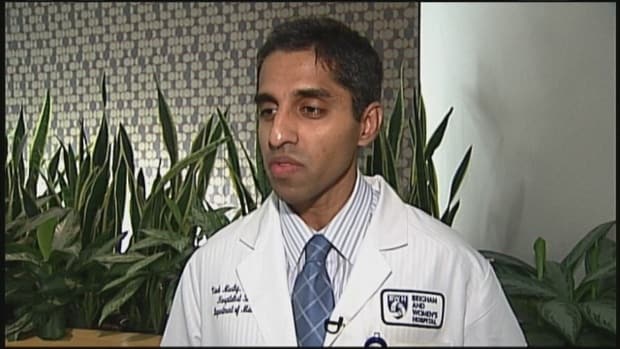 Dr. Vivek Murthy, President Obama’s choice for the next Surgeon General, is the subject of a battle between groups on both sides of the gun control issue. (Photo credit: WCVB Boston)

“The United States Senate today stood up to the gun lobby by confirming Dr. Vivek Murthy as our country’s next surgeon general – an important step forward in addressing gun violence in our country as a public health problem,” said John Feinblatt, president of Everytown for Gun Safety.

The confirmation is a blow to gun rights groups like the National Rifle Association, who has been fighting to keep guns from becoming a public health issue.

The group fears the Obama Administration may be attempting to use the Office of the Surgeon General to launch an anti-gun agenda and has announced it will score senators based on how they cast their vote for the position. The NRA keeps an extensive database which grades politicians on their voting records. More pro-gun public servants receive higher marks. The NRA then uses the grades to inform its base which of their candidates will tow the pro-gun line during elections.

In a Dec. 9 letter to the two top Republican senators on Capitol Hill, Chris Cox, executive director of the NRA Institute for Legislative Action, wrote of the group’s continued opposition to the nomination.

“Dr. Murthy’s political activism on behalf of a radical gun control agenda compromises his ability to speak to a broad segment of the American public on questions of health and science,” Cox wrote to senators Harry Reid and Mitch McConnell.

The question of Murthy’s agenda on guns came about after a group he founded, Doctors for America, sent a letter to Congress in January 2013 calling the Sandy Hook shooting in Newtown, Connecticut, a public health issue, the Washington Post reported.

The group collected signatures and stories from thousands of people across the country calling for stronger gun legislation, the letter signed by Murthy read.