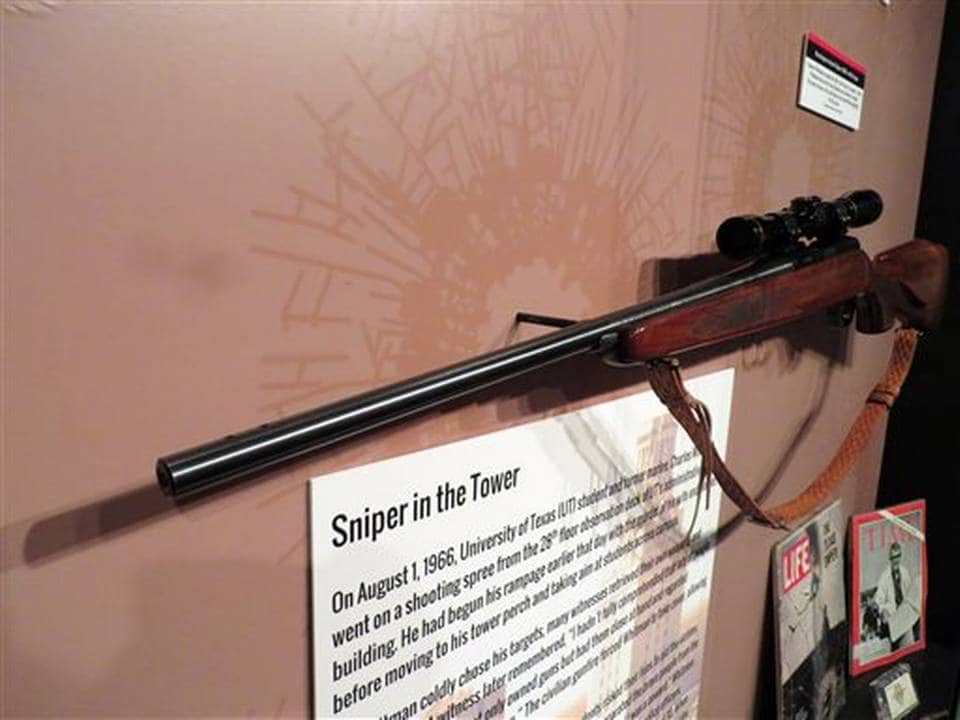 Charles Whitman’s Remington 700 ADL rifle in 6mm is now on display at the National Museum of Crime and Punishment in Washington D.C. after being acquired from a private dealer. (Photo: Crime Museum)

Perhaps one of the most infamous firearms ever carried by a criminal in his final act, the bolt-action rifle among those used by Charles Whitman in the 1966 University of Texas shootings, is now on display in the nation’s capital.

The gun, a Remington 700 ADL in 6mm with a vintage Leupold scope, believed to be the same one that Whitman climbed to the top of the 28th floor observation deck of the UT main building and among the guns used to kill 12 people with, was acquired in a private transaction by the National Museum of Crime and Punishment in Washington D.C. for an unknown sum.

The gun had been offered for sale for $25,000 in September and still has handwritten scope ballistic adjustments on a piece of tape affixed to the rifle’s butt stock.

“With the University of Texas shooting being the first of its kind, we wanted to pay tribute to all the victims who lost their lives that day, while also recognizing all the police officers who continue to risk their lives on a daily basis,” museum head Janine Vaccarello said in a release last week.

Whitman, a former Marine, shot 46 people on Aug. 1, 1966, after first killing his parents. Over a 96-minute period, he sniped at pedestrians, passers-by, and police from the UT tower, some at ranges over 400-yards away, before being killed by three officers and a deputized citizen.

After his death, it was found on autopsy that Whitman had a brain tumor that could have had an influence on his actions. Whitman has since been described as the country’s “first active shooter” and is credited as being the catalyst for the formation of university police departments and modern SWAT teams to form and train.

Some caution that the rifle used in the event should be treated with tact.

“The University of Texas community was forever scarred by the 1966 shootings,” UT spokesman Gary Susswein told the Associated Press. “We strongly hope that these events are not glorified in any way and that the memories of the victims are always honored.”

The rifle will go on display alongside such infamous objects as serial killer Ted Bundy’s Volkswagen Beetle and John Wayne Gacy’s clown suits. Other firearms on hand at the museum, established in 2008, include an Uzi used in the film Scarface and revolvers from the crime epic Godfather series.