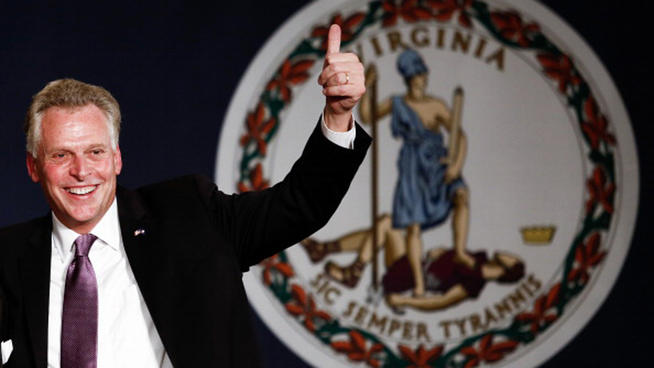 Gov. Terry McAuliffe wants to renew the state’s vanquished gun ration law among other measures in a fresh push for gun control in the Old Dominion State.

Democrat Gov. Terry McAuliffe is set to announce a series of gun control measures in Arlington later today that would include rationing firearms, expanded background checks, and revoking concealed carry permits under some circumstances.

The measures, as part of a new public safety initiative, will be detailed at press conference at the Arlington General District Court the first working day after the second anniversary of the 2012 Newtown School shooting.

McAuliffe plans to call for a return of the state’s controversial one-gun-a-month rationing scheme, propose to cancel the concealed carry permits of those who are behind on child-support payments, and seek background checks at gun shows, the Washington Post reported.

“As Governor, there is no greater responsibility than ensuring the health and safety of the citizens I serve,” McAuliffe said. “Our Commonwealth and our nation have seen too many tragedies as a result of dangerous weapons getting into the hands of the wrong people. These common-sense proposals will keep guns out of the hands of criminals, will keep our communities safe, and will help to build a new Virginia economy.”

Virginia’s one-handgun-per-month rule was instituted in 1993 and repealed a decade later by the effectively Republican-controlled state legislature in a slim majority. The then republican Gov. Bob McDonnell, who ironically had voted for the original measure as a state lawmaker, signed the repeal in February 2012.

McAuliffe, who ran as a staunch anti-gun candidate in his 2013 campaign, garnered no less than $1.1 million in donations from a political action committee funded by former New York Mayor Michael Bloomberg. This came as he dodged questions about support of an assault weapon’s ban that led Beretta USA to strike Virginia off its list of possible relocation sites once the Democrat won office with 48 percent of the popular vote.

In March 2014, the Governor broke in his veto pen by refusing to sign the state’s burgeoning “guns in cars” bill, which had sailed through the state legislature by a 2:1 margin.

That move brought comment from lawmaker Benjamin Cline, (R-24), the sponsor of vetoed legislation who told media at the time, “The governor is clearly listening to his friends in the gun control lobby instead of the majority of Virginians who support the Second Amendment.”