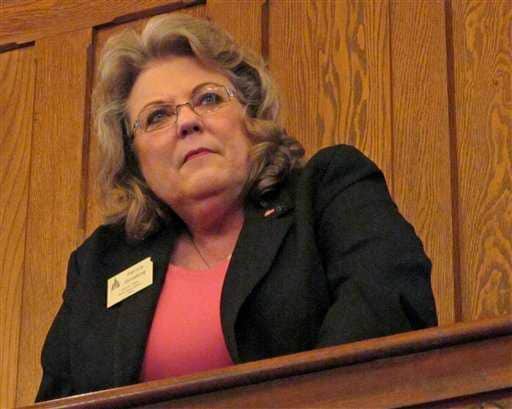 Kansas State Rifle Association President Patricia Stoneking is seeking an apology for a 9-year-old student who was suspended after bringing an empty shell casing to school. (Photo: AP)

A Kansas gun rights group is circling the wagons around an elementary student who was removed from school after a spent cartridge casing fell from his pocket while on school grounds.

Camron Carlson, a student at Chanute Elementary School in rural Neosho County, was threatened at first with a 186-day expulsion before ultimately being suspended for five days earlier this month over the incident. According to the Chanute Tribune, Carlson had been helping to sight in a hunting rifle with a friend for the upcoming deer season the night before and had picked up the brass then. While exiting a restroom at the school on Dec. 2, the youth dropped the spent case from his pocket and another student alerted teachers. Once in the office, the boy’s mother, Deana Carlson, was called by administrators who said the boy could be facing expulsion.

“I looked at him and I said ‘this is the wrong call,’” the mother told local media. “I could understand if there was a student who had multiple offenses…there was nothing dangerous about what he had done.”

Carlson maintained that Chanute Elementary School Principal Gary Wheeler had questioned her son without the presence of another adult to the point of making the boy break down in tears.

“My child should not have been bawling,” she said. “The principal made him feel that an empty shell was dangerous. In some people’s eyes maybe it is.”

This has a state gun rights organization seeing red.

“I have interviewed the Mother and find that the actions of the school are inappropriate at best. To suspend a 9 year old child for having an empty shell casing in his coat pocket sorely lacks any common sense,” said Kansas State Rifle Association President Patricia Stoneking in a statement released by the group Monday.

The group is the state affiliate of the National Rifle Association and is seeking a public apology from the district to the youth and his mother.

Stoneking stressed that sighting in a deer rifle is lawful and common in the state and that, while guns and live ammunition should not be brought to schools, the spent casing in question was incapable of causing harm.

“It reminds me of the kid who chewed his pop tart into the shape of a gun being suspended from school. I think we have to draw the line and choose to be more careful about what we want to classify as zero tolerance violations,” said Stoneking.

While the county attorney admitted that he does not consider a spent casing to be ammunition under the school’s weapon policy, the district is not backing down and advises that student safety is of the utmost importance.

“Out of respect, we do not make comments on individual cases,” explained Chanute Public Schools Superintendent Dr. Jim Hardy in an email to Guns.com. While he did contend that the district would not suspend any student for 186 days for bringing shell casings for school, he could not elaborate on other details but mentioned that several parts of the story as reported by local media were inaccurate.

“We know this sets us up for criticism because people do not know the whole story, but to do otherwise would be disrespectful to our parents and students.  Please know that the situation was handled appropriately in the school environment,” advises Hardy.