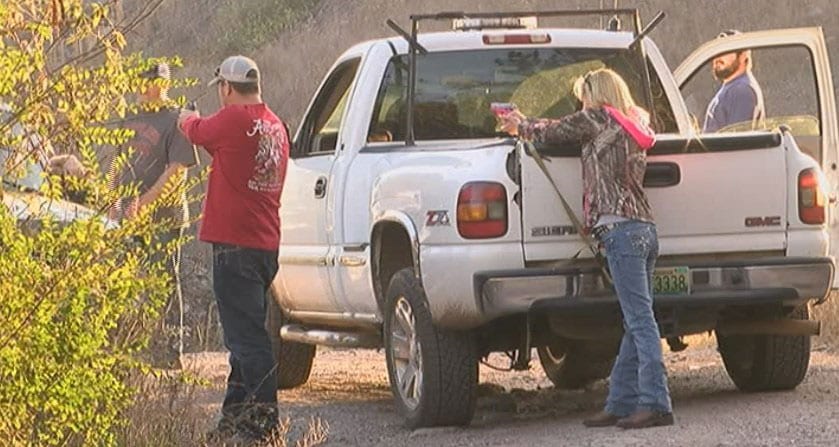 She never had to fire her pretty pink gun, but the suspects sure didn’t try to get away either. (Photo: WSFA)

Three suspects believed to be responsible for at least two burglaries over the weekend were apprehended near Warrior, Alabama, thanks to one couple’s keen eyes, instincts, and the fact that they were able to hold the suspects at gunpoint until deputies arrived.

The home of Sarah and Chris Wyatt was broken into Friday afternoon. Although the suspects made off with two TVs and several Christmas presents, the suspects were also caught on the couple’s recently-installed video surveillance system.

The video shows a woman walking up to the house and knocking on the front door. Moments later, after there was no answer, and the woman and two men kicked in the door and helped themselves to the loot inside. The trio then took off in a black Ford Ranger pickup truck, which was also captured on the video.

The suspects were not identified at the time and no arrests were made.

But according to reports from local media, a twist in the case came two days later. As the Wyatts were driving down a country road Sunday evening, they passed a black truck which looked surprisingly familiar to the one they had seen in the video. They also recognized two of the three people inside the truck.

At that point, Chris blocked the truck with his own and confronted the occupants inside, who first claimed they were lost, but apparently the truck was full of what appeared to been stolen goods.

“We corrected them where they were,” Chris told reporters.

Then Chris and Sarah, both armed, held the trio at gunpoint while they called 911.

Meanwhile, deputies were nearby investigating another burglary when they got the call from the Wyatts.

When officers arrived, they took the three into custody and the latest burglary victims came to the scene to identify their stolen belongings in the truck, all of which were returned to them.

Eric Paul Stillwell, 38, of Quinton, Natosha Derrick, 29, and Elizabeth Frost, 28, are charged with third degree burglary and second degree theft of property, and are each being held on a $25,000 bond.

The Wyatts don’t know if they will get their own belongings back, but Sarah said, “Sure hope so, if they don’t, at least we’re all safe and in one piece and they are off the street for now.”

“I’m here to protect my family,” Chris said. “And as a man that’s what you do. And we caught them.”

However, authorities are warning residents that one male suspect is still on the loose from the break-in at the Wyatt home.