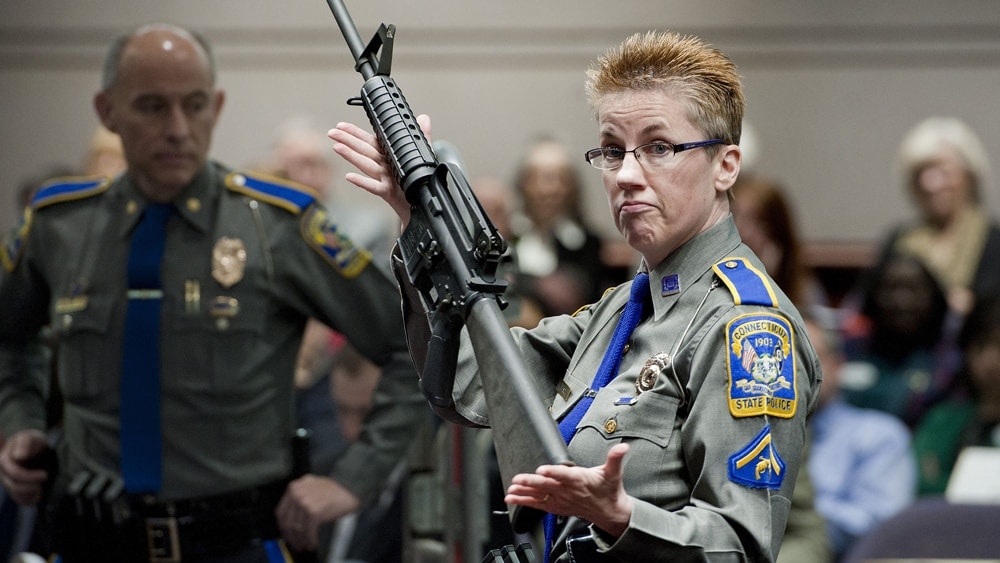 A Connecticut State Police detective holds up a Bushmaster AR-15 rifle, the same make and model of gun used by Adam Lanza in the Sandy Hook School shooting, for a demonstration during a hearing of a legislative subcommittee reviewing gun laws. (Photo: Associated Press/Jessica Hill)

The class named in the complaint, filed in a Superior Court in Connecticut, includes the families of nine victims killed during the incident and one who was injured.

On Dec. 14, 2012, the gunman, Adam Lanza, used a Bushmaster XM15-E2S rifle to murder 20 children and six adults before killing himself with a handgun, authorities found in their investigation. In the aftermath investigators found 154 casings of .223 rounds, and learned that his mother, Nancy Lanza, who he murdered before the shooting, bought the gun legally. However, the day of the shooting, she left her gun safe unlocked and open to her mentally ill son.

The lawsuit’s argument is akin to what gun control advocates use to support an assault weapons ban, and also incorporates how Bushmaster marketed its products before the Sandy Hook shooting as having military features.

The complaint details how the AR-15 rifle was adapted from the M16, and the similarities they share.

“Both weapons are designed for mass casualty assaults,” the complaint reads. “Both share design features of exceptional muzzle velocity, the ability to accommodate large-capacity magazines, and effective rapid fire.”

And it highlights language used by Bushmaster to market its products to a civilian market. At one point before the shooting, Bushmaster used phrases like “military-proven performance,” “the ultimate combat weapons system,” and “Forces of opposition, bow down. You are single-handedly outnumbered” in its advertisements.

Essentially, Bushmaster created an attitude that its model XM15-E2S empowers the shooter, giving the ability to perform like a solider in the theater of war.

The marketing aspect is exacerbated by the gunman’s other passion: video games.

“This marketing tactic dovetails with the widespread popularity of realistic and addictive first-person shooter games — most notably “Call of Duty” — that prominently feature AR-15s and rewards players for ‘head shots’ and ‘kill streaks’ among other assaultive and violent ‘achievements,'” the complaint reads.

In turn the complaint details the U.S. Army’s attitude toward managing weapons like the M16. For example an entire base will go on lockdown if a weapon goes missing. It explains that civilians are not subject to the same standards as soldiers such as medical fitness standards and training for use and care for the weapons.

It adds that military and law enforcement personnel have a legitimate need for weapons like the AR-15, and recognize that strict safety measures are necessary when caring for such weapons.

The plaintiffs are asking for monetary damages, punitive damages, attorney’s fees, costs and injunctive relief, for the wrongful death of their loved ones.