Authorities in Pennsylvania continue to search for the man believed to be responsible for a deadly shooting spree Monday, which left six people deceased and one person critically injured.

After more than 12 hours of intense searching, which included K-9 units and police helicopters, the hunt for 35-year-old Bradley William Stone of Pennsburg was temporarily halted around midnight, but is expected to resume early this morning.

Stone was believed to have last been seen just before 8 p.m. in Doylestown, a local NBC affiliate reported. A man, who was out walking his dog, told authorities that someone matching Stone’s description and armed with a knife attempted to carjack the man. But the dog owner was armed with a gun and fired several shots at the man believed to be Stone, causing him to flee into a nearby wooded area.

The search for Stone began early Monday morning and started with a 911 hangup call around 4:25 a.m. Responding officers found the mother and 75-year-old grandmother of his ex-wife fatally shot in their home.

About 30 minutes later, police received a second 911 call from a concerned neighbor who lived next door to Stone’s ex-wife, Nicole Hill Stone. The neighbor later told reporters that she could hear arguing before Stone gave her an eery message as he left with the couple’s two young daughters. 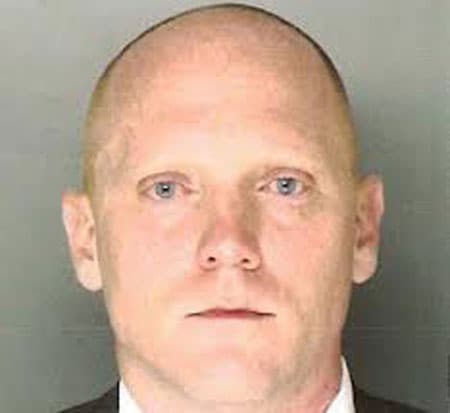 While serving in Iraq, Bradley Stone worked as an Artillery Meteorological Man and earned several medals, but was discharged after he developed PTSD. (Photo: NBC)

That same neighbor was startled by what sounded like gunshots.

“I opened the window and I asked him ‘Is everything OK?’ He just looked at me and said ‘She’s hurt pretty bad. We have to leave. She’s hurt.’ And he just got in the car and just left,” the neighbor said.

When police arrived, they discovered Nicole’s body inside. She had been fatally shot.

However, authorities said the girls, ages 8 and 5, were unharmed physically and are safe. Stone apparently dropped them off at his neighbor’s house shortly after leaving their mother’s apartment.

At about 8 a.m., authorities went to the home of Nicole’s sister, but before they entered, could see a figure moving around inside, which led to a three-hour standoff, but Stone still escaped. When police entered the home, they found that Nicole’s sister, Trish Flick, along with her husband, Aaron, and their two teen children had been shot. All were deceased except for their 17-year-old son, who was rushed to a trauma unit and remains in critical condition.

Investigators did not say whether the teen boy was able to communicate or provide them with any information.

Some friends said that, although shocked, they are not surprised by the morning’s events.

“She knew and [Bradley] would tell her that he was going to kill her,” said Evan Weron, a friend of Nicole. “She would go around to all the ladies in the neighborhood, ‘This man’s going to kill me.’ She felt threatened.”

Authorities have enlisted neighboring law enforcement agencies to help with the search and have asked area residents to remain vigilant and lock themselves indoors.

Stone, who is a former Marine who served in Iraq and believed to have suffered from Post Traumatic Stress Disorder, is described as 5-foot-10, weighing 195 lbs. He is believed to be clean-shaven, but could possibly have a red beard and very short red hair. He could be wearing military fatigues and sometimes uses a cane or walker. Authorities said he should be considered armed and dangerous.