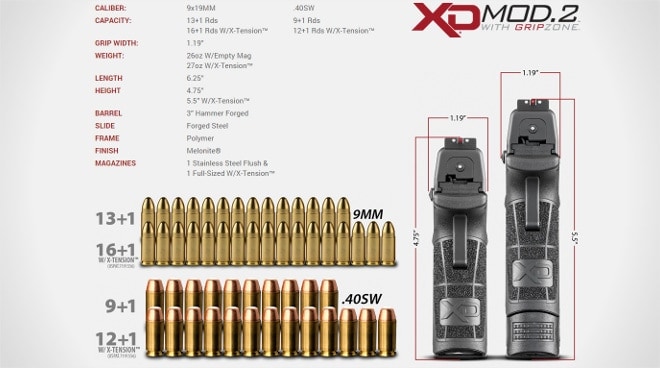 Technical specifications and a good look at the slim design. (Photo: S.A.)

The Mod.2 series draws from the original XD series and the enhanced XD-M series to create an XD that’s easier to grip, conceal and handle without the aggressive grips and sharp corners of the competition-oriented XD-M.

While these new pistols are turning heads with their sleek profile they’re also drawing fire for one of the gun’s new traits, the “Grip Zone.” The concept of the Grip Zone is great, no one’s really digging at the design because it’s a bad idea.

The Grip Zone is what Springfield calls the gun’s new texture, one that’s smooth on the sides for comfortable carry with traction strips around the curves of the pistol, akin to very detailed stippling work. Combined with slight fingergrooves the Grip Zone has the same appeal as Heckler & Koch or Walther patterns that are very successful.

It’s just the fact that the grip has “Grip Zone” written down the side in capital-tactical lettering. As if people are going to forget which part of the gun is the Grip Zone.

Chuckles notwithstanding, the updated XD Mod.2 pistols have a lot of great features that gives them solid drawing power. Measuring in at just 1.1 inches wide at the controls the Mod.2 pistols are just a fraction of an inch thicker than many single-stack guns, but with a much higher capacity. 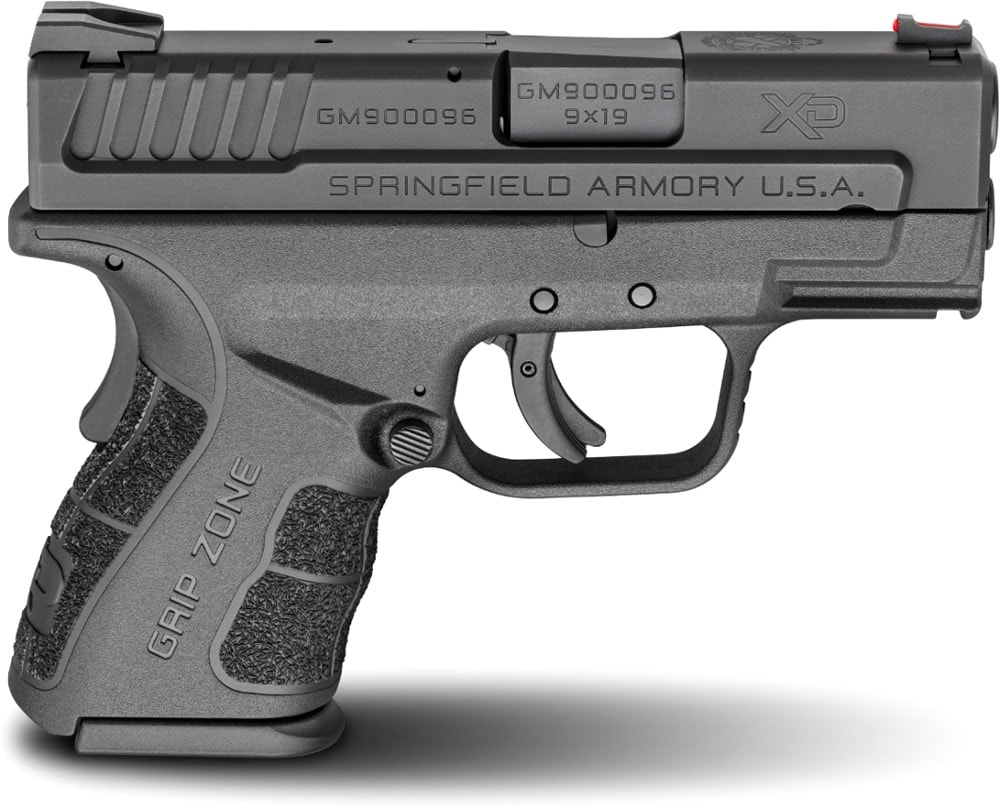 The .40 S&W model weighs in at 26 ounces including the flush 9-round magazine and just one ounce more with the full-size 12-round mag. The gun uses existing magazines and grip extensions for XD 3-inch models.

The gun maintains the original high beavertail grip that makes controlling the gun easy enough, chambered for snappy .40-caliber rounds, and combined with the new grip contour should be even easier to run.

Mod.2 models change more than just the grip texture with deeper thumbgrooves on the sides and a smaller-diameter grip all around. The slide has a less-pronounced step around the frame rails that tapers at the muzzle with the frame to help guide the pistol into a holster.

One small but important change is to the takedown lever which has been modeled off the XD-S series. The lever has a low-profile contour to cut down on snag while keeping the width down and the amount of metal sticking out to a minimum.

The slide serrations are deeper and recessed with an extended rear cut to make racking the slide even smoother, and riding the slide is a set of XD-M-style swept rear sights and bright front fiber-optic sight making the Mod.2 a lot visually accessible than the original.

The Mod.2 upgrades make the new models a bit more attractive than the original sub-compacts and the street price, around $475 for the black models with Melonite slides, is about $100 more than the vanilla XD 3-inch models.

If you can get over the two little words molded in duplicate on the grip of these concealed-carry pistols, words that can be covered up with a little rubber grip tape, you might want to give the new XD Mod.2 a once-over the next time you happen to be at your friendly local gun store.

These guns are swinging in the “Features Zone,” even if one of them is more prominent than the others. With the support you know Springfield XD products have, Mod.2 pistols will be excellent everyday-carry guns in short order.