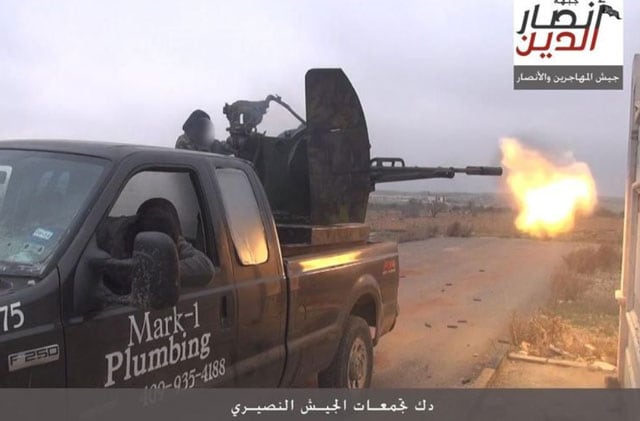 A Texas City plumber has taken his phone off the hook after being bombarded by phone calls when one of his company trucks was recently seen on an Islamist militant group’s Twitter feed. The truck, which still features the company’s Mark-1 Plumbing logo, now carries an anti-aircraft weapon in the bed.

But the owners of Mark-1 Plumbing assure everyone that they have no involvement in Syria’s civil war.

“We had no intentions or no idea that this would even happen,” Jeff Oberholtzer, the son of the owner, said.

Oberholtzer said he personally traded the old truck in at an AutoNation Ford dealership outside of Houston last November. He also said that they typically remove the decals beforehand, but assumed the dealership would do it for them. Apparently, they were wrong.

Although tracing the truck’s exact path is nearly impossible, it is known that the truck went to auction and was passed through several owners before it ended up in the hands of the Chechen group known as Jaish al-Muhajireen wal-Ansar.

Oberholtzer said they have even received some threats and they just want to put the whole thing behind them.

“We have a secretary here. She’s scared to death,” he said. “We all have families. We don’t want no problems.”