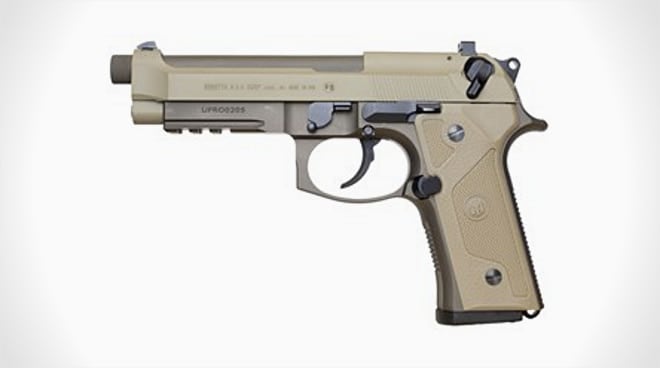 Beretta USA announced the newest M9-series variant, the M9A3. As the name implies, this pistol’s been engineered for military users. Beretta is submitting the design to the U.S. Army in a push to update their current sidearm contract.

The M9A3 incorporates many improvements, some subtle, like having a third accessory rail slot on the frame, to major changes, notably the slim, straight Vertec-style grip design.

The grip takes things a step further than the Vertec grip with deep checkering on the front- and backstrap and will include a replacement wrap-around grip to simulate the original shape of the M9.

Other tweaks to the design include the extended, threaded barrel, dovetailed tritium-powered night sights, 17-round Sand Resistant magazines standard and a new, three-tone earth, tan and black color scheme.

In addition to the visible changes the internals of the pistols have undergone a series of tweaks to make the M9A3 more rugged through both redesigns and materials improvements.

As the current crop of Beretta pistols reaches the end of their service life, the Army is looking for a more modern pistol to be the standard sidearm for U.S. troops. There are many companies champing at the bit to land this large and distinguished contract, not just for the revenue, but for the status as the company that makes the military’s handguns.

The Army along with the Air Force has set requirements for possible replacement candidates with their Modular Handgun System that favors modular designs with varying grip size options, night sights, Picatinny rails and extended, threaded barrels for suppressors.

If the Army chooses to extend its contract with Beretta the future of the MHS may be effected or delayed by the decision, but officials have said in the past that they will continue to consider other designs no matter what.

Even if the M9A3 is only implemented as the pistol used to wrap up existing contracts for M9 pistols, soldiers will clearly be issued a superior sidearm over the existing M9 and M9A1s currently in service.

And Beretta is going to make it hard for the Army to not select the M9A3 to finish out its current contracts as the updated model will be offered — at least to the military — at a lower cost per unit as the M9s being delivered today.

“After listening closely to the needs of U.S. Army and other Service small arms representatives, we determined the M9, much like its counterpart legacy weapon systems (M4, M16, M240, etc.), was capable of being upgraded through material and design changes,” said Gabriele de Plano, who is in charge of the company’s military sales and marketing. “The resulting M9A3 we are offering to the DOD will likely cost less than the current M9 and answer almost all of the Services’ enhanced handgun requirements.”

With millions invested in M9 and M9A1 parts and accessories, tools and training, an updated and lower-priced M9A3 might be too hard for the military to pass up even though the design maintains the open slide and slide-mounted safety.

These updates also make the M9A3 equally appealing to civilian commercial and law enforcement markets, so we’re glad to hear that the M9A3 is expected to be available to the public next year after it’s debut at upcoming trade shows.

“Furthermore, the M9A3 benefits from having a law enforcement and commercial variant that will be launched at SHOT Show 2015 in Las Vegas, Nevada,” said Beretta USA vice president Rafe Bennett. “The M9A3 offered to the DOD is the exact gun that consumers will be able to purchase in the second quarter of 2015.”