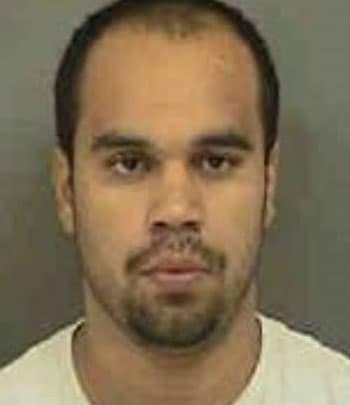 Carlos Delcid had been arrested twice for stealing prescription pills from a nearby home. (Photo: Charlotte-Mecklenburg Police Department)

One teen is deceased and his brother behind bars after they attempted to break into a Charlotte home Tuesday evening and were met by an armed 14-year-old boy.

Anthony Hernandez was at his grandmother’s home and both were not feeling well – the boy had bronchitis and his grandma, Anna Marie Wyant, was recovering from hip surgery. They were taking care of each other while the boy’s grandfather, mother and brothers were at a Christmas party.

Around 5:15 p.m., while Hernandez was getting his grandmother something to eat from the kitchen, he heard noises behind the house and saw someone walking around, WBTV reported. Initially, Hernandez thought it might have been his brother, so he called out, but received no response.

Soon, the window was shattered and Hernandez called out again, only this time warning whoever it was outside that he had a gun. But the intruders did not heed the warning and continued to attempt to get inside, and that’s when Hernandez fired three shots from his grandfather’s handgun.

One of the suspects, later identified as 18-year-old Isai Robert Delcid, collapsed in the back yard, and the second suspect, 22-year-old Carlos Delcid, fled in a gray SUV.

Authorities released a recording of the 911 call placed by Anna Marie.

“He’s out there bleeding for God’s sake,” the 74-year-old woman told the dispatcher. “He broke our window, he was coming in.”

She also said several times that she thought the man may be dead.

When officers arrived, Isai was pronounced dead and Carlos was apprehended a short time later.

Investigators determined that the two suspects were brothers, but the boy’s grandfather, George Wyant, also confirmed that he had seen Carlos before. Apparently Carlos came to the Wyant’s home to do HVAC work recently.

This was the third time that the Wyant’s home had been targeted for a break-in, but authorities did not say if they believed the incidents were related. Carlos told investigators that they had planned to steal prescription pills from another house nearby, but once they got there, realized the occupants were home and went to the Wyant’s home instead.

George told reporters that he taught all of his grandsons to use a firearm after their father was fatally shot in 2008 while working at his automotive shop. Anthony was only 8-years-old at the time.

“I took him to a shooting range,” George said. “All the boys, I wanted them to learn gun safety. That’s what all of us should have for protection. These are different ages, and you have to protect yourself.”

“If I was by myself,” Anna Marie added. “God knows what they would have done to me.”