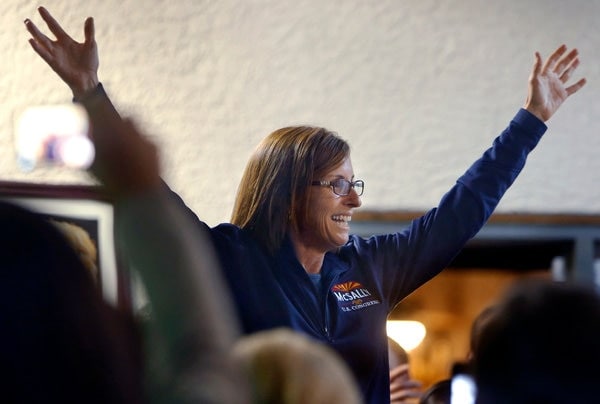 McSally’s win in the hotly contested race against incumbent Rep. Ron Barber, also a democrat and former Giffords’ aide, came after a challenge of the Nov. 4 election that saw her with a 161-vote lead. Following the recount, she ended up with a majority of 167-votes as certified by Maricopa County election officials.

Her win for Arizona’s Second Congressional District is the final icing on the cake for Republicans in the U.S. House, will now enjoy control of a healthy 247 seats, which, according to the Wall Street Journal, is the largest majority either party has held since the 71st Congress adjourned in 1931. Democrats will control 188 seats.

“We’re grateful to everyone who devoted their time and resources, especially during the extended vote and recount processes, to get us over the finish line,” said McSally, a retired Air Force colonel and combat veteran, in a statement. “With the results of the recount now official, we can move forward as one community to bring Southern Arizonans the strong representation they deserve.”

Gun politics were a big part of the race between McSally and Barber with an ad from Giffords’s Americans for Responsible Solutions political action committee sparking controversy. The television spot, entitled “Stalker Gap” contended that McSally opposed making it harder for stalkers to obtain guns. However, the ad backfired when the Republican, who was the victim of a violent stalker herself, called the ad personally offensive and demanded it be taken down.

For her part, McSally is outspoken in her opposition to increased checks on private sales, saying on the record in 2012, “The law is clearly based on the Second Amendment that we all have the right to keep and bear arms. And I have the right as a private citizen to sell my possession to anyone I want to. It’s my lawful right. So, just like I can sell my car, I can sell my gun. And so, that’s the law, and that’s not a loophole. It’s freedom.”

The Giffords Wednesday issued a statement congratulating McSally on the hard won campaign and stated that they looked forward to working with the Congresswoman-elect in crafting legislation to prevent convicted stalkers from getting guns.

Praise for McSally came from the National Rifle Association who endorsed the candidate. “Martha stood on principle and supported our constitutional freedoms, despite being relentlessly attacked by the gun-control movement,” said Chris W. Cox, chairman of the NRA Political Victory Fund, in a statement.