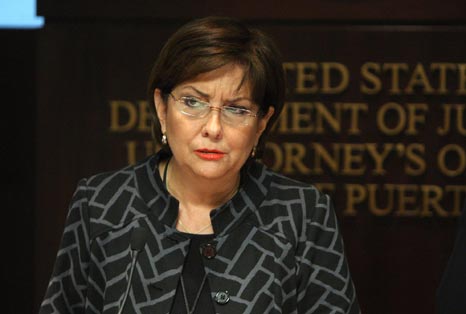 Facing up to 50 years in prison and fines that could top $105,000 is Sergio Calderón-Marrero, a former Puerto Rico Police Department lieutenant in charge of detectives in the northern city of Bayamón. The charges arrayed against the former lawman include conspiracy to commit identity fraud, unlawful production of identification documents, aggravated identity theft, attempted witness tampering, and attempted obstruction of justice.

Rosa Emilia Rodríguez-Vélez, United States Attorney for the District of Puerto Rico, detailed that Calderón-Marrero between January 2012 and February 2014 allegedly forged firearms training documents for clients, going so far as to use the notary seal of a deceased attorney and the superintendent of police to help obtain notoriously hard to get concealed carry permits.

Puerto Rico has some of the strictest gun laws in the U.S.

The island territory requires those who want to legally own a firearm first obtain a weapons license or “Licencias de armas,” which costs $125 and has to be renewed every five years. This permit allows the holder to possess a maximum of two firearms, which have to be registered with the police, for which they can only purchase ammo in the same calibers as their declared firearms. Ammunition purchases are limited to 50 rounds per calendar year per firearm.

Those who want a concealed carry permit must already have a weapons license, become a member of a gun club recognized by the police, obtain an additional $25 Target-shooting permit (“Permisos de tiro al blanco”), which allows the possessor to purchase larger amounts of ammunition and file an application to appear before a judge to argue their case for a CCW. This typically requires using a lawyer to expedite the process and obtain additional training.

The process costs upwards of $1,000 and the number of permits issued are so low as to classify Puerto Rico as a “No Issue” jurisdiction when compared to such notoriously strict “May Issue” handgun permit states as New Jersey and Hawaii.

However, the Commonwealth also suffers from a crime rate that is seven times higher than that found in the rest of the U.S. despite strict control over legal firearms.

The elusiveness of legal permits on the island has led to a burgeoning black market in illegally procured permits.

In May, the federal government handed down a 510-count indictment against a ring that included an attorney, gun shop owners and police firearms instructors who allegedly charged customers between $1,000 to $1,150 to obtain concealed carry permits without having to undergo the established training, vetting and judicial process. Federal agents believed the organization delivered some 250 rubber stamped permits over a three-year period ending in 2013.

In August, three of the members of that ring entered into a plea agreement.

Meanwhile, according to WAPA, Calderón-Marrero surrendered himself to federal authorities late Monday and was transferred to the Metropolitan Detention Center in Guaynabo. He is set to appear Thursday before U.S. Magistrate Judge Bruce McGiverin for an initial bail hearing.