Student who brought guns to campus given 8-year sentence (VIDEO) 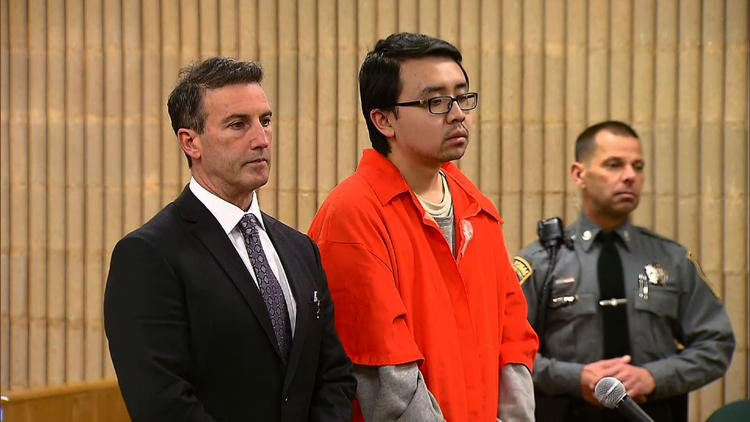 William Dong, was given an eight-year sentence for bringing two handguns for which he had a permit for onto the campus of the University of New Haven where he was a student. (Photo: News 12 Connecticut)

A concealed carry permit holder who was arrested after being found with two handguns on a Connecticut college campus was sentenced Friday to a maximum of eight years.

William Dong, 23, the now-former University of New Haven student, said he carried the handguns for protection against mass shootings but ran afoul of both federal and state charges when it was discovered he had what Connecticut law classifies as an assault rifle.

He was arrested in 2013 on campus with the two handguns in his possession while a third gun, a Bushmaster XM-15 rifle, was locked in his SUV just off campus. Dong, who worked at the time for an armored car company, had a clean record and had permits for his firearms, was the subject of a police manhunt on campus after a homeless woman saw the rifle in his vehicle at drugstore near campus and called police.

This led at the time to a campus lockdown until police found Dong and took him into custody. Upon a search of his room, police found newspaper clippings of various mass shootings, which in itself is not a crime but was seized upon by local media. When the smoke cleared, he faced a federal charge for one count of illegal sale or transport of an assault weapon and state charges for two counts of having a firearm on unauthorized premises since the university had prohibited guns even with a permit.

Dong pled guilty to the two state counts in October then to the federal charge in November.

“He was lawfully permitted to carry the two handguns, the other gun he always left in his car for target shooting,” Dong’s attorney, Fred Paolett, explained to WTNH last week.

Milford Superior Court Judge Frank Ianotti sentenced Dong to eight years on the handgun charges, with a mandatory two of those spent in prison. As the former student has already served one year while his case has wound through the legal system, he could be eligible for release in a year after which the rest of his state sentence will be served on probation.

As reported by the New Haven Register, the balance of Dong’s full eight year sentence is held in suspension as long as he refrains from visting UNH, register as a Deadly Weapon Offender and have his mental health evaluated.

State’s Attorney Kevin D. Lawlor told the court that should Dong not comply, the state would seek the maximum penalty

However, Dong still faces sentencing on the federal gun trafficking charge for buying a Bushmaster rifle in Pennsylvania and bringing it to Connecticut where it was banned under that state’s assault weapons laws.

During Dong’s case, prosecutors made much of the fact that investigators found that the student had recent Internet searches on his computer researching the Sandy Hook shootings and that he had amassed 2,700 rounds of ammunition.

“If a tragedy was about to happen, it was certainly averted by the good work of police,” Iannotti told Dong at the sentencing hearing. “I don’t know what your intentions were that day, but you created a scary, hectic environment and put a lot of people on edge. I hope your intentions were not what we all think that they were.”

U.S. District Judge Robert Chatigny is expected to hand down his additional federal time at an upcoming hearing Jan. 29.