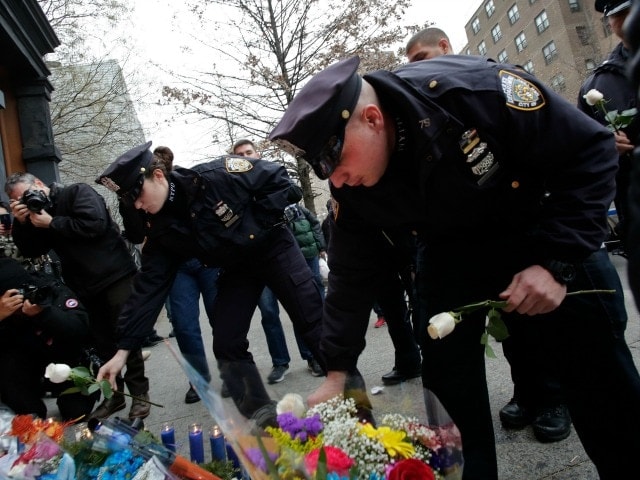 NYPD officers lay flowers near where fellow officers Rafael Ramos and Wenjian Liuby were ambushed by a gunman with a criminal record last weekend. The attack has quickly led to calls for more gun control. (Photo: AP/Mark Lennihan)

The brutal execution-style attack Saturday that left New York Police Department officers Rafael Ramos and Wenjian Liuby dead at the hands of a killer with an extensive criminal record has some calling for increased gun laws.

Baltimore-native Ismaaiyl Brinsley, 28, allegedly murdered the officers at close range as they sat in their patrol car on a Brooklyn stet corner. Investigators believe that Brinsley, who took his own life soon after the attack, posted chilling anti-cop messages to social media and shot a former girlfriend before traveling to New York to carry out his threats. Police later determined that the suspect had an extensive criminal history with no less than 19 past arrests in Georgia and Ohio on charges that ranged from shoplifting to carrying a concealed weapon. Besides the arrests, he spent at least two years in prison and had a history of mental illness that placed his family in fear of his actions.

It was Brinsley’s ability to obtain a firearm, which he likely should have been prohibited by law from possessing due to his criminal record, that has groups ranging from New York’s Congressional delegates to national gun control and civil rights organizations championing more gun laws even though the city of 8.4 million already has some of the strictest in the country.

“The brutal killing of two NYPD officers this weekend is an unspeakable tragedy,” Everytown for Gun Safety’s president John Feinblatt told the New York Daily News. “Our country’s lax and inconsistent gun laws are a central part of the problem. A felon can buy a gun in a state that does not require background checks and bring it to New York, a state that does, and destroy lives.”

Fienblatt repeated his group’s now-familiar call for expanded background checks to include virtually all firearms transfers. Such a program was backed by the organization, funded in large part by former New York Mayor Michael Bloomberg, in a recent ballot initiative in Washington state.

The firearm recovered from Brinsley, a Taurus semi-automatic handgun, was purchased at a pawnshop in Georgia in 1996 by someone other than him and it is not known how the subject obtained the firearm. Brinsley was 9 years old at the time of that last documented purchase. Even if Brinsley was a legal possessor, simply having the handgun on a New York City street without an NYPD-issued permit was a felony in and of itself regardless of his past criminal record.

Fienblatt’s sentiments were echoed by Rep. Charlie Rangel, D-New York, on MSNBC’s The Rundown. In that interview, the veteran lawmaker who has been on Capitol Hill continuously since 1971 criticized police union officials for pointing blame at current New York Mayor Bill de Blasio and not going after guns.

“They should be conducting interviews mourning those that they lost and their family, talking about how do insane people get firearms,” said Rangel, who holds a strong pro-gun control voting record. “And not criticizing but seeing how we can stop insane people from getting an opportunity to get firearms to kill anybody.”

Finally, the NAACP Legal Defense Fund issued a statement that expressed condolences to the families of the lost officers then called for calm and productive dialog before calling for change in gun regulation.

“These two killings and the life-threatening injury, like so many other unfortunate incidences of gun violence, provide a stark example of the need for sensible gun control measures, and the need to thoughtfully address untreated mental illness,” read the statement.

In response to the call from the NAACP, a representative for the New York State Rifle & Pistol Association called the group, “totally out of touch with reality.”