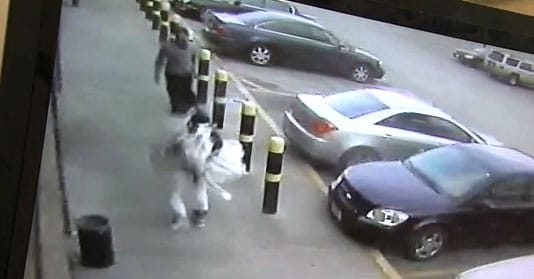 The Sunday before the most recent robbery attempt, a man attempting to steal an arm full of clothing was chased down by an armed clerk. (Photo: KSHB)

An attempted robbery of a clothing store in Kansas City, Missouri, Thursday night ended in an exchange of gunfire — the store owner and one of the two suspects in the hospital are recovering from multiple gunshot wounds.

After waiting in a parked car for an hour and a half, two armed men entered Underground Clothing around 7:45 p.m. and attempted to rob the place. But the suspects were surprised when the store owner pulled out a 9mm and began firing back at them, KSHB reported.

When the gunfire erupted, surveillance video from a neighboring laundromat captured images of the second suspect fleeing in a silver car and leaving his accomplice behind.

It’s not known at this time who fired first, but authorities confirmed that both Bayazed and one of the suspects were hit. In fact, Bayazed was struck nine times in the stomach, thighs and arm and although his injuries were initially believed to be life-threatening, he is now expected to be okay. The suspect’s injuries were also considered life-threatening, but there’s no word on his current condition.

Family members — none of who wanted to be identified — are shocked that Bayazed survived being shot nine times and call it nothing short of a miracle that no major arteries were hit.

“He’s really lucky, like, he was shot so many times and everyone, when they first heard the story, we thought he was gone,” one of Bayazid’s sisters told a local Fox affiliate.

Bayazed’s family said he’s a likable guy who enjoys owning his own business.

According to Christopher McCauley, who owns the laundromat next door and rents the space to Bayazed, the clothing store has been targeted nearly a dozen times in the last two years.

Bayazed is talking with authorities, who are hoping they can identify and find the second suspect.