Dear Santa: I (still) want an Accuracy International in .338 Lapua Magnum for Christmas 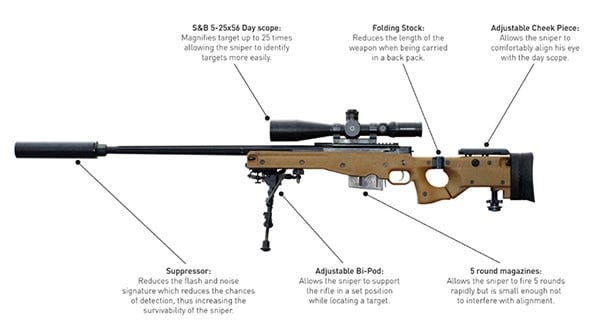 It’s me again, Johnny. I hate to keep bothering you every year, but how long have I been writing to you, since I was about six, right? So, anyway, that’s about 60 years of letters, and, while you came through on a couple of them, I have to be honest here Santa, on some others, I’m still waiting.

For example the Morgan sports car. I hate that flipping Kia Soul sitting in the garage, and I had hoped that by now you would have come through with the Morgan. But, that’s okay, I guess I understand.

So, this year I won’t ask for that really cool British sports car, you know, the one with the deep blue color, the black leather tonneau cover, and the wire wheels. No, I’ll try to forget about ever having the wind blowing through my hair, and the feel of the open road as I wind around hairpin curves in the epitome of elegance.

That highly polished walnut dashboard must be waiting for someone else. But, in lieu of the car, I do have a small favor to ask, one that also harkens gets back to a Christmas past and previous letters to you. It’s that Accuracy International .338 Lapua sniper rifle, the one the the Leupold scope I asked for three years ago.

Do you think it’s possible that, just maybe, this year I could find it under the tree?

I’ve been good this year.  Well, at least better then some.  I know you remember Mike, my brother. He’s the schmuck who shot me in the knee with his .22 all those years ago, and that little hole is still there Santa! Anyway, your naughty file on him has just got to be at least four inches thick, yet somehow he keeps getting what he asks for. Last year he asked you for that neat Mossberg 500, and what did he wake up to on Christmas morning? Surprise, the Mossberg! The year before that it was the Ruger, and on and on. Do you see what I mean Santa? Somehow, things don’t seem very fair to me at times like this.

So, anyway, this year it’s the Accuracy International, round two. And just an FYI, I’ll be in Illinois with my girls for Christmas this time around, and you know how they are up there with their silly gun laws, so maybe wrap it in something discrete. I don’t know if you are subject to state laws, being a magical being and all, but experience tells me, in Illinois, they try first and ask questions later, so be careful.

And, just in case you change your mind about the Morgan, I’ll go ahead and clean out the garage. I think there will be just enough room.

And you can also forget about Mike this year Santa, ’cause I heard him saying the other day that he doesn’t believe in you any more, honest!