Ruger’s brought back a fan favorite with the reintroduction of the 10/22 Charger pistol series chambered for .22 Long Rifle featuring a handful of updates to make the guns even more flexible and easy to accessorize.

The 10/22 Charger is Ruger’s time-tested 10/22 rifle in a factory pistol configuration. The new Charger series has a completely different stock style that combines a traditional forend with a modular AR-15-pattern grip mount and A2-style pistol grip.

This is a hard launch with updated 10/22 pistols on their way to stores near you. And priced at $309 for the Standard model and $409 for the Takedown version — with even lower prices to be had in the real world — these will pack a lot of fun into a compact, affordable package no matter what kind of shooter you happen to be. 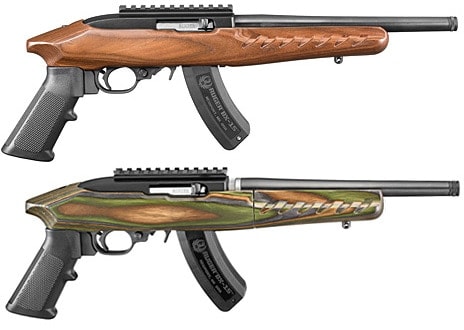 Along with the announcement of the updated Charger family of pistols Ruger is announcing its newest 15-round 10/22 magazine. Designed to offer a 50 percent more capacity than the standard 10-round rotory mag, the new BX-15 has a shorter profile that allows it to be more comfortable to grip and easier to manipulate than their extended 25-round magazine.

Each new Charger comes with a factory-threaded 10-inch barrel, threaded for common 1/2×28 muzzle accessories including suppressors and an installed Picatinny rail for mounting optics and one of the new magazines, which just so happens to be the perfect length for use with the included bipod that comes with every new Charger pistol.

The Standard model 10/22 Charger is built with a brown laminate wood stock where the Takedown model has a green laminate stock and forend.

Just as you’d expect from any 10/22 product with the Takedown name this new Charger breaks apart with a quick-detach barrel and attached forend that pops right off with the push of a button and snaps back together even easier.

The higher sticker not only covers the Takedown function but the custom cutout hard case that comes with it. It also weighs slightly more at 3.2 pounds, .1 pounds more than the Standard model with the fixed barrel.

The only thing that doesn’t come with the new 10/22 Charger pistols are sights or optics. These are designed to work with long eye relief scopes or red dot sights, not really iron sights, which will add a little bit to the total price before these guns are completely range-worthy.

Given how personally shooters take optics selection it’s probably better off that Ruger didn’t try to shoehorn shooters into using one brand of glass or another, which would ultimately just raise the price for anyone unsatisfied with Ruger’s choice of optics. This is a good thing on Ruger’s part. 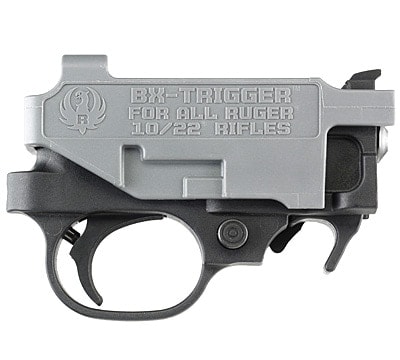 The new BX-Trigger comes with a protective snap-on cover to hold in all the new components. (Photo: Ruger)

Existing Charger pistols fetch a nice price premium ever since Ruger discontinued the original series. That won’t last much longer as word spreads that there’s a new Charger on the way, especially Chargers with all these features and included extras.

The BX-15 magazine isn’t the only new 10/22 accessory Ruger’s announcing on the eve of the new year. Ruger is also launching a new drop-in single-stage fire control group for all 10/22 pistols and rifles, the BX-Trigger. This $89 trigger assembly drops right in to all 10/22s ever made, bringing the trigger pull weight down to a target-ready 2.75 pounds, less than half of the standard trigger weight.

Fore more information about the new 10/22 Charger pistols, BX-15 magazines and BX-Trigger head on over to the Ruger website for details and ordering information.