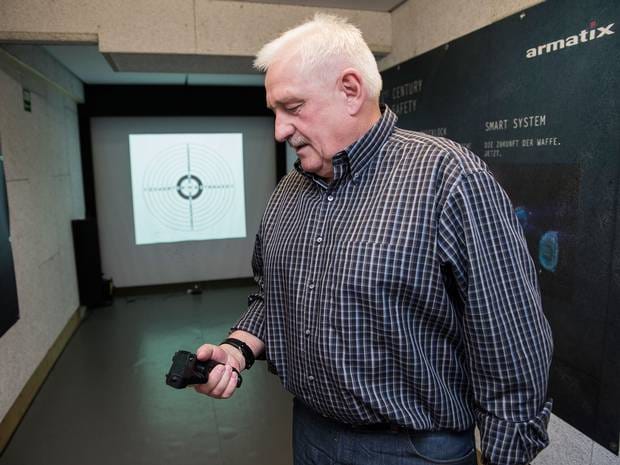 Ernst Mauch examines one of his iP1 personalized digital handguns that will not fire without its companion watch. He plans to market a new 9mm version to U.S. police in 2015. (Photo: Washington Post)

Armatix, who currently has 5,000 unsold .22-caliber iP1 personalized handguns in storage, plans to develop a larger caliber version for a second go at the U.S. market.

According The Globe and Mail who recently sat down with the company’s managing director Ernst Mauch, the company is undaunted by its recent unsuccessful foray into American gun culture. Mauch, a storied engineer who rose to the co-chief executive of Heckler and Koch before moving to the would-be smart gun company, is ready for round two.

“We are not allowed to give up,” contends the designer who sees the invention of a personalized firearm that will only fire for the owner as a mission.

“The bad side of the story is that so many killings happen every day and the community does not want to hear it. That hurts me, that hurts my heart,” explained Mauch.

The small, 30-employee company at first tried to sell European police and militaries on their firearms which incorporate biometrics that will only allow the weapon to fire if the matched RFID technology companion wristwatch is within range of the gun itself. Without the watch, the gun will not shoot.

Then in 2013, Armatix obtained a Type 8 federal firearms license, issued to importers of firearms other than destructive devices. Set to expire in May 2016, the mailing address on file with the Bureau of Alcohol, Tobacco, Firearms and Explosives lists Armatix USA’s Beverly Hills office, but the company has yet to successfully sell a gun in the country.

The iP1, its initial commercial offering, which Mauch describes as the world’s first digital pistol, was quietly debuted in California in March to a swift backlash from the gun rights community.

This was followed in May by a Maryland gun shop who announced they would start stocking the rimfire polymer framed handgun in an attempt to convince, “fence sitters and anti-gun people,” to start buying the innovative new gun. Within days the shop’s owner, who never stocked the $1,800 iP1, reversed his course in the wake of fierce outcry and criticism that any sales would trigger a little-known New Jersey law mandating mandatory smart gun-only sales in that state.

Now, with news of the New Jersey Attorney General’s decision earlier this month that the Armatix offering does not meet the state’s personalized handgun law passed in 2002, Mauch sees an opportunity to get the technology into the U.S. market without the repercussions that prevented it before.

The engineer plans to make a tour of various police agencies in 2015 to speak about his new project, a 9mm version of his gun termed the iP9. That tour will be made in concert with the Washington D.C.-based Metro Industrial Areas Foundation, which has long advocated smart gun technology as part of a campaign to prevent gun violence.

In November, that group visited seven gun manufacturers in New York, Connecticut, Maryland and Georgia to request that some of America’s largest gun makers, including Colt, Ruger and Glock begin to use smart gun technology moving forward.

Critics of smart guns argue that the technology is immature, pointing to polls which have found that roughly three-quarters of the public have said they would not buy a smart gun, would not trust the reliability of one, and that the government should not mandate such technology.

Firearms industry trade groups have made a point to state that they do not oppose smart gun technology, only the mandate that, should it become viable, traditional firearms would be prohibited or otherwise limited for sale.

“Manufacturers should be free to sell to consumers the products that meet their needs, and they want to purchase,” Larry Keane, senior vice president and general counsel for the National Shooting Sports Foundation, told Guns.com in May. “If there is consumer demand for such a product the market will work.”