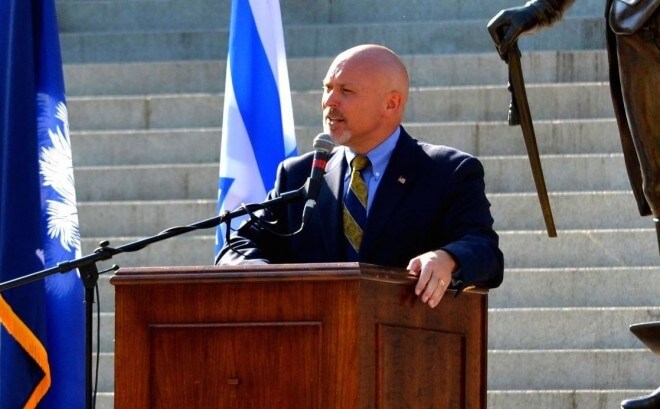 State Rep. Alan Clemmons (R) wants students in South Carolina to get three weeks of instruction on the importance of the Second Amendment each year. (Photo: AP)

A Palmetto State lawmaker has introduced legislation to create a Second Amendment Awareness Day and add three weeks of gun rights classes to the school year.

The measure would take aim at zero-tolerance policies that are described as, “out of control,” by the bill’s sponsor while establishing one day per year in which students could celebrate the Second Amendment with a poster and essay contest. Further, it would establish a requirement that public schools in South Carolina deliver three consecutive weeks of civics instruction on the right to keep and bear arms from curriculum developed by the National Rifle Association.

“My initial aim of the bill was to undo South Carolina school’s zero tolerance policies, which fail to consider any facts, by extending reasonable free expression to school students to include gun related topics,” state Rep. Alan Clemmons wrote on Facebook. “As I thought through the end results of our national zero tolerance policies in schools, it occurred to me that we are raising a nation of children to believe that any mention of firearms, let alone their ownership, to be a socially unacceptable, if not an evil, act.”

Clemmons’s legislation, the Second Amendment Education Act, is a two-fold move to protect gun rights in state schools. First, it would establish Second Amendment Awareness Day each year on Dec. 15. The day would be highlighted by a poster and essay contest in which students of all grades would be encouraged to submit entries on the theme of “The Right to Bear Arms; One American Right Protecting All Others.” From the submissions, the South Carolina Legislative Sportsmen’s Caucus would select statewide winners.

The second tier of Clemmons’s bill would mandate that all public elementary schools, middle schools and high schools in South Carolina provide three weeks of classes focused on Second Amendment coursework. While the State Superintendent of Education would adopt the curriculum, it would be developed in concert with the National Rifle Association. Among the points to be covered would be the history of the amendment’s adoption as well as important gun-rights legal cases such as Heller and McDonald that have defined it in recent years.

Finally, the bill would prohibit teachers and administrators for punishing students for artistic impression that includes firearms. Clemmons cited an incident in August in which a 16-year-old boy from Summerville, South Carolina, was forced to fight disciplinary actions taken by the school and local authorities over a creative writing assignment in which he jokingly shot a dinosaur.

It is unclear how the measure will enhance South Carolina’s schools academically. Earlier this year the American Legislative Exchange Council in its annual report card on public schools nationwide gave the state a C+ and noted that it came in ranked 51st among the states and the District of Columbia in National Assessment of Educational Progress fourth-and eighth-grade reading and mathematics exam scores from 2003 to 2013.

Although only pre-filed earlier this month, the news of the proposed new law is drawing support from gun rights advocates in the state who feel the Second Amendment should be given special instruction.

“Kids need to know what it’s about and why it’s so important and that’s what sets us apart from other countries,” Chuck Scott, owner of Aiken Gun Rack Range, told WRDW.

In addition to Clemmons’s legislation, a second bill, S.95 , has been submitted to the state senate that would establish the “South Carolina Gun Safety Program,” as a one-semester, one-credit elective course in marksmanship instruction. Besides safety training, the course would also highlight the, “role of firearms in preserving peace and freedom,” as well as the Second Amendment.