Century Arms International unveiled its new line-up for 2015 earlier this month to select media and while most of the new products are AK-centric, the company has more than just AK rifles up their sleeves. 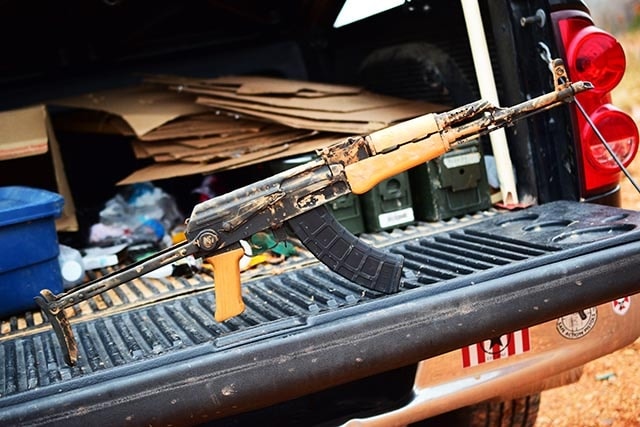 The Century-made Hungarian hybrid runs great no matter how dirty it gets. (Photo: Jim Grant)

The first product unveiled is a mutt rifle. A combination of Century’s home-brewed C39 all-American AK and the Hungarian SA-85M, the AK63D is a strange amalgamation of East meets West.

Although Hungary’s SA-85M rifles are based on the stamped AKMs, the AK63D is built on Century’s C39 milled receiver. This 7.62x39mm caliber AK features an underfolding stock and feeds from standard AK47 magazines. The furniture is blonde surplus and so is the pistol grip. The AK63 will begin shipping soon. 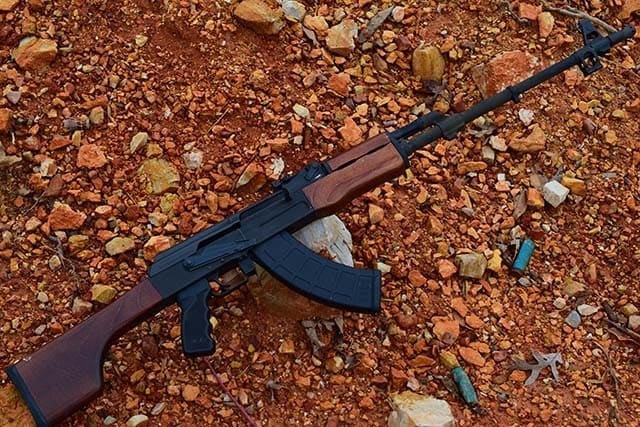 At the 2014 National Rifle Association show in Indianapolis, Century teased the development of a long-barrel RPK-style C39 variant. Due to a lack of updates on the product’s development, many believed the American made RPK wouldn’t see the light of day. Thankfully, the Tennessee event proved the LMG-inspired product isn’t vaporware.

Built on a hybrid C39 V1, V2 receiver, the RPK features a chrome-lined ESS-manufactured barrel for longevity and a phosphate finish for a more militaristic appearance. Century’s RPK ships with two Magpul 30-round magazines and a detachable bipod. Due to its limited production of 1,200 units and the semi-custom work involved in its construction, the 7.62x39mm faux squad automatic has a steep MSRP of $1,299. Look for it Spring 2015. 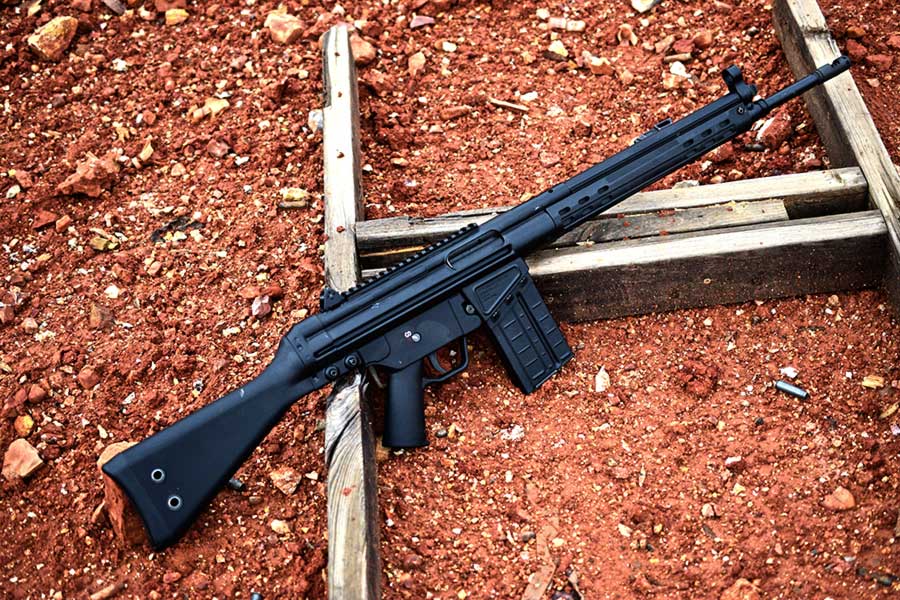 Century’s take on the German battle rifle is marketed to the everyman. (Photo: Jim Grant)

More than a decade after Century imported budget-priced CETME rifles, they’re still held as examples of Century’s inability to build proper firearms. Despite Century CETME rifles being a hodgepodge of Special Weapons and military surplus parts, the blame is laid solely with CAI. The majority of the over-stated issues stem from the system’s difficult-to-headspace action.

Seeking to remedy this, Century enlisted the help of the engineers intimately familiar with roller-delayed. Marketed as a no-frills, entry-level battle rifle, the C308 lacks the iconic diopter sights of true G3 rifles in favor of a simple aperture flip-sight.

The C308 feeds from standard G3 magazines and is threaded for AR10 muzzle devices. Includes two 20-round magazines and a five-rounder. ETA: 2015. 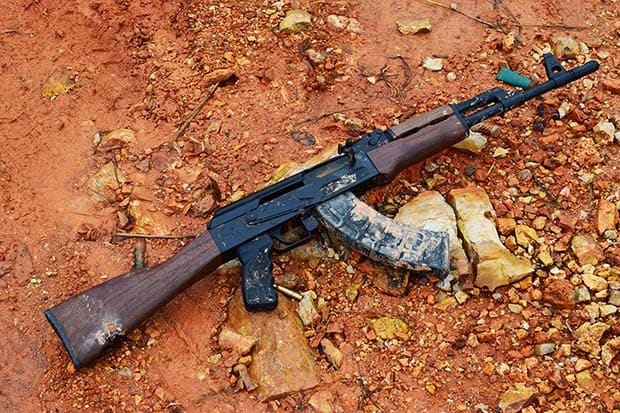 When the C39 landed in early 2014, shooters looking for an affordable milled AK were overjoyed. Feeding from common inexpensive AK47 magazines, the 7.62x39mm all-American carbine was a hit. Though not everyone was thrilled with the C39, especially purists.

In response, the engineers at Century updated its C39 rifle to a V2 configuration. The V2 still features a heavy-duty milled receiver but now is finished in black nitrate and accepts standard AKM furniture.

Century purports the new C39 V2 is capable of sub two MOA groups with hand-loads. Due to the limited size of the test range, I was unable to verify these claims. Look for the V2 January 2015. 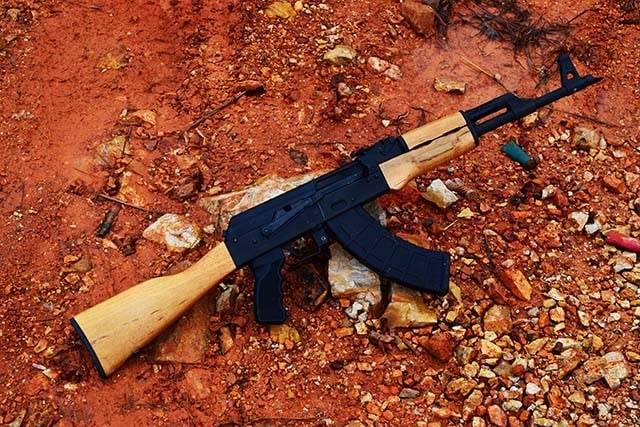 Although the majority of Century’s new AK products feature a milled receiver, in 2015 the company is releasing a stamped rifle as well, the RAS-47.

Although like the C39 rifles it lacks a bayonet lug, it will include a side-rail for mounting optics. A feature still absent on the milled offerings from Century. The RAS-47 ships soon. 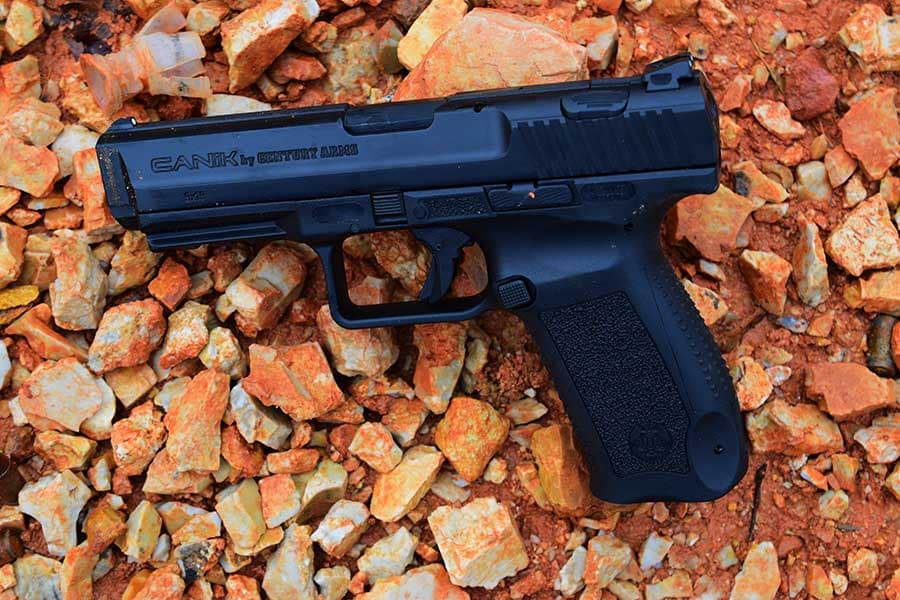 An upgraded version of the TP9, the SA has a vastly improved trigger and feeds from 18 or 20 -round magazines. (Photo: Jim Grant)

The unexpected star of the show is the Canik TP9SA 9mm pistol. Feeding from a 18 or 20-round magazine, the TP9SA is the single action only, polymer-framed semi-automatic handgun of choice for the Turkish military.

Retailing for $399, the TP9SA looks and feels like hybrid of the HK VP9, Walther PPQ and Glock 17. The TP9SA ships with two 18-round magazines and a kydex holster. It should be hitting shelves now.

Although trigger time with Century’s new offerings was limited, writers were able to fire hundreds of rounds through each model.  While they all felt, function and shot great, the real stars of the show were the C308 rifle and TP9SA pistol.

The C308 harkens back the days of affordable CETME rifles without the reliability issues and the TP9SA shows that Century is more forward-thinking than most would believe. Though companies like Glock, Ruger and Smith & Wesson might not take Century Arms seriously now, they should if they don’t want to lose a chunk of the market to them.