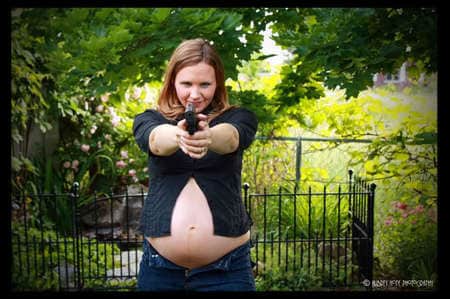 Recently my article titled “20 rules for winning gunfights” garnered some attention—most notably when I mentioned being prepared to shoot anyone…even a pregnant woman.  Allow me to explain.

Rule no. 1, the one that a lot of these folks cherrypicked from my 20 rules for winning gunfights, went like this:

This emotional, mental and psychological decision must be made long before the incident arrives.  You may have to shoot a man, a woman, pregnant lady or a teenager.  Think about it before the time arrives.  Be prepared to stop a co-worker, a neighbor, a teammate, friend or even a relative.  You may have to physically hurt or kill someone that you know or someone you’ve talked with or like or someone you think you know well.

Let’s break it down piece by piece:

This emotional, mental and psychological decision must be made long before the incident arrives.

The decision to use deadly force cannot be made the very second the situation arises—at least not without potential consequences of losing.  Being prepared is essential in everything we do.  If we want to do something well, we need to be prepared.  If we’re prepared, we won’t fear as much either.

I’ve spent a lifetime thinking about—and working towards—protecting people.  Fortunately, most people don’t have to think about that kind of thing for a living.  I do.  As such, I’ve mentally explored—and have personally been involved with—some pretty “unique” circumstances.

Most people might feel emotionally overwhelmed by pushing a button that shoots a missile that would kill a terrorist several hundred miles away—and they’d never see it.  When your work involves wielding a gun for a living or if you believe in protecting yourself or your family even unto bloodshed, the reality is you may have to look another human being in the eye and shoot them up-close.  Talk about psychological trauma!  Who wants to do that?  Cops and soldiers all over the world face that every day.  It’s not that they want to; it’s their job.

Likewise, citizens who carry guns because they have the Constitutional guarantee to do so, also don’t want to harm people, but they should to be prepared to as a last resort.

You may have to shoot a man, a woman, pregnant lady or a teenager.  Think about it before the time arrives.

In order to condition the civil mind to not hesitate in a lethal situation, we need to consider all the options.  That said, when I explore the thought of shooting a pregnant lady, I take all of my past experience and training into account.  For instance, my SWAT days come to mind.  If a pregnant lady was holding someone hostage and I had to shoot her, what’s the difference between shooting a woman or a man in that situation?  Nothing.  Both are acting in ways that are wrong.  The difference is psychological and lies within us.

Believe me, I’m not a misogynist; I love and respect women.  I’ve never been abusive in anyway towards any woman.  I often feel more sympathy towards women when investigating domestic violence incidents.  My natural inclination is to protect women and children.  It took a lot of time and psychological training to reach the point I have.  I was taught when I was little to never—ever—to hurt a girl or a woman.  But, in law enforcement, I’ve seen women who have brutalized and murdered so I’ve learned to be careful when dealing with both men and women.

When I lived and worked in the Middle East and as an air marshal on commercial airplanes after 9/11, I had to watch out for female suicide bombers who might stuff their bras with bombs.  Even before the 2009 underwear bomber, the threat of a woman wearing a fake pregnant belly and stuffing it full of homemade explosives—whether on a plane or especially in the Middle East—was a very real threat.  When your friends die from IEDs, those threats become very real.  I’ll protect my friends before some fanatic terrorist pretending to be pregnant.  Will I shoot a pregnant woman if I have to?  You bet I will.

That’s the mindset needed for the protector class.  If a cop or a soldier doesn’t have that mindset, they need to get it quickly, regain it, or get out of that line of work.  Frankly, anyone who wants to win a gunfight needs to at least mentally explore the possibilities of such unusual circumstances, too.

And then there are teenagers…

In one study done during the late 90s, it was estimated that 30 percent of the 60,000 fighters in Liberia alone, were under 17-years-old.  Yes, kids will kill.  Kids, especially teenagers, can often be more dangerous than adults.  It doesn’t have to be in a war zone either.  Gangbangers can be unpredictable menaces.  Sadly, one of the most horrific crimes I’m aware of was carried out by a 13-year-old boy who wasn’t even in a gang.  If you don’t think juveniles can be dangerous, just consider the atrocities at Columbine High School or the mayhem at the middle school in Jonesboro.

Be prepared to stop a co-worker, a neighbor, a teammate, friend or even a relative. You may have to physically hurt or kill someone that you know or someone you’ve talked with or like or someone you think you know well.

I think most people believe that bad things won’t happen to them.  When it does, they’re totally shocked.  Remember when Timothy McVeigh blew up the federal building in Oklahoma City?  I still recall the news media interviewing his neighbor.  His neighbor said something about how nice and normal he was.  Yeah, a lot of people don’t realize how evil people can really be.

With all the workplace violence incidents that have occurred and continue to occur, you might see a person you work with go, well, postal. Even the term postal developed after a few US Postal Service employees went off the deep end and killed patrons and co-workers.

Sure, most of us believe that violence will only come from strangers, but that’s not the case.  Just ask any victim of domestic violence.  Sadly, sometimes those cases turn into death threats at work…or worse, homicides.

These cases of homicidal teens or pregnant ladies may be unusual.  Thankfully, most people won’t be in a lethal confrontation in their lives, let alone one with a pregnant woman.  But, in my opinion, any person who carries a gun for self defense or even has one in their home for personal protection should be prepared to use it.  And, that means, they need to explore those things that sometimes aren’t very pleasant, even when it includes the thought of shooting a pregnant lady.