Two U.S. citizens charged in coup attempt in the Gambia 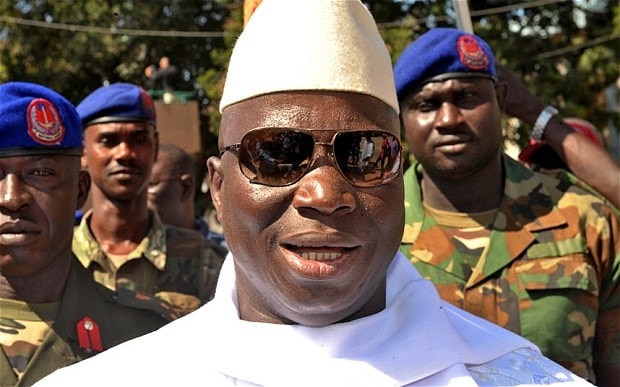 Federal prosecutors announced charges against two men in an attempt to overthrow the government of the small West African country of Gambia that includes smuggling weapons and assaulting the presidential residence.

The men, Cherno Njie, 57, of Austin, Texas, and Papa Faal, 46, of Brooklyn Center, Minnesota, are in federal custody for conspiracy to violate the Neutrality Act as well as weapons charges stemming from their alleged role in the unsuccessful coup in the country last week. Njie is a U.S. citizen of Gambian decent while Faal holds dual U.S./Gambian citizenship.

“These defendants stand accused of conspiring to carry out the violent overthrow of a foreign government, in violation of U.S. law,” said U.S. Attorney General Eric Holder. “The United States strongly condemns such conspiracies. With these serious charges, the United States is committed to holding them fully responsible for their actions.”

According to court documents, Faal, a long-time veteran of the U.S. Army and Air Force that included recent combat service in Afghanistan, was the leader of a ground assault team of some 10 to 12 ethnic Gambians from the United Kingdom and Germany who attacked the residence of that country’s president, Yahya Jammeh, on Dec. 30. Njie financially backed the attempt and stood in the wings to assume interim leadership of the country once Jammeh had been deposed.

The assault fell apart once Faal’s force met heavy resistance and both Americans managed to flee the country only to be arrested by the Federal Bureau of Investigation after returning to the U.S.

The plot had been orchestrated in August with Faal, who had left Gambia some 23 years before, going by the codename, “Fox,” while Njie, who allegedly financed the operation to the tune of up to $220,000, was known to the conspirators simply as, “Dave.” The other conspirators were recruited from Gambian expatriates in Western Europe.

As part of the preparations for the coup, Faal legally bought eight semi-automatic AR-15 style rifles in Minnesota and shipped them to Gambia disassembled and hidden in 55-gallon drums while Njie purchased other weapons, night-vision equipment, body armor and black uniforms for the assault team. Each of the members of the team, who according to the affidavit held various military backgrounds, were paid $4,000 in advance for their service.

After assembling in the West African country of two million early in December, the group settled on a plan to assault the State House, the official residence of the country’s leader. Promised the support of up to 160 sympathetic Gambian soldiers who never materialized, the assault fell apart after sustaining casualties including at least one death, and the conspirators disbanded.

Search warrants conducted on Faal and Njie’s stateside residences found operational budgets for the coup attempt, AR-15 manuals, receipts for equipment as well as maps and plans for the attack.

Gambia, since gaining independence from the United Kingdom in 1965, has had a long and varied history of coups despite its official designation as a republic. In 1981, a low-key British commando operation managed to reverse a Marxist revolution that seized the government while the country’s president, Sir Dawda Jawara, was in London on a state function.

Faal, who is the great nephew of Jawara, in 2013 wrote a self-published book entitled “A Week in Hell” about that period in Gambia’s history. While his uncle was returned to power through British and Senegalese intervention, Jammeh later ousted him for good in 1994 when he, as a 29-year-old junior officer in the Gambian Army, led another coup that deposed the democratically elected president.

Since that time, Jammeh has suspended the country’s constitution, claimed to have developed a banana-based cure for AIDS, sponsored a literal witch-hunt, and ordered the massacre of 54 foreign migrants in 2005 who he claimed were part of yet another coup attempt.

Jammeh, whose official state website lists him as His Excellency Sheikh Professor Alhaji Dr. Yahya Abdul-Azziz Jemus Junkung Jammeh, increasingly wears a number of hats in the small West African country’s government. Besides his office as President, he is listed as the Minister of Defense, chief of the Public Service Commission, as well as head of the Ministry of Agriculture, and of the National Intelligence Agency. In addition to these duties, he also claims to hold an Admiralship in the Navy of Nebraska.

According to the Washington Post, Faal and Njie were arraigned separately Monday and did not enter a plea. If convicted on all counts they face as much as 25 years in prison.

Meanwhile, the chief of Gambia Armed Forces, Lt. Gen. Ousman Bargie, penned an ingratiating public letter to President Jammeh this week assuring the leader of, “…the unalloyed loyalty and support of the Gambia Armed Forces to Your Excellency, the government and people of The Gambia at all times.”