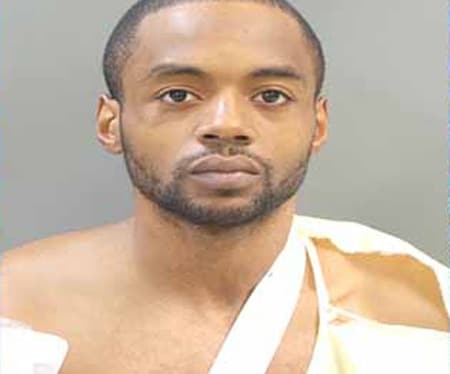 Domonique Moreland was shot in the shoulder and is now facing charges for burglary and theft. (Photo: KMOV)

An attempted robbery of a St. Louis cell phone store Friday morning didn’t work out as planned after the armed owner opened fire on the suspects.

Authorities said three suspects entered the parking lot in two separate vehicles, a green Mitsubishi Diamante and a blue Jeep Cherokee, but instead of parking, the driver of the Diamante drove through the front door to gain entry to the store.

The three suspects then jumped out of the cars and began grabbing cell phones, but the armed owner grabbed his gun and opened fire.

“They were so fast. [It] wasn’t five seconds,” the store owner told KMOV. “They were here, broke all the show cases and started putting phones in their bags and their clothes.”

But once the owner, whose name has not been made public, started shooting, the suspects dropped the bags full of phones and started running.

About an hour after the attempted robbery, police received another call about a shooting. When officers arrived, they found 26-year-old Domonique Moreland suffering from a gunshot wound to the shoulder. However, authorities determined that Moreland was one of the suspects involved in the attempted robbery and had been shot by the store owner.

Moreland was transported to a local hospital where he received treatment for his injuries and was released into police custody. He remains in jail with a $50,000 cash-only bond and is facing charges for burglary and theft.

Authorities also later determined that the two vehicles used in the smash-and-grab were both stolen. However, authorities were able to retrieve the stolen cell phones.

Authorities have not yet found the remaining two suspects, but the investigation is ongoing.

The store owner said this was the third time that his store has been burglarized in the six months that he’s been open for business.