Opinion: Pros, cons and other options for the “worst tactical training video ever” (VIDEO)

A man who teaches firearms and tactics created an online video that has gotten a lot of attention.  From what I’ve seen, mostly negative attention.  The video is about defensive shooting from a vehicle and it’s been labeled the “worst tactical training video ever”.

Admittedly, I hesitated when considering writing a piece about a firearms training instructor whom I do not know anything about.  After all, I do not desire to point out someone’s flaws or be rude.  But people in my life keep telling me about it or sending me links to it, that I just cannot avoid it, so, I figured I’ve got to write something.

Instead of being rude, however, (which has become way too easy in this virtual age), I’ll just point out some positives, some negatives and some other options when shooting from a vehicle that this instructor didn’t mention.

I’m choosing to leave out the name of the instructor as well as his website, mainly because I don’t want anyone harassing him if they disagree with his tactics.  The good thing about tactics is there are several options to get things done, but there’s also a definitive wrong way and a right way.  I’ll get to the cons later, but first the pros. 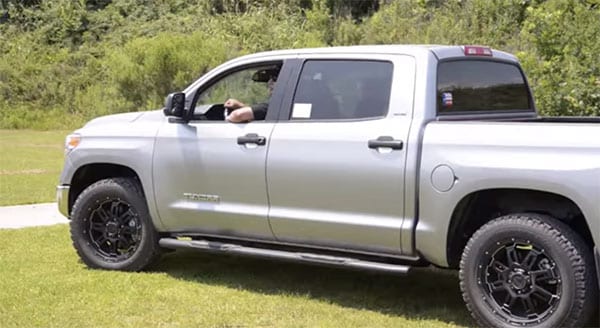 It is a nice truck…

This instructor is articulate, comes across as good-to-go and the video is put together well enough.  He claims to have sponsors but they claim not to know who he is, and from what I saw, it appears he also does some good in his community by helping a veterans K-9 nonprofit organization.  His website is professional looking, and he has a nice truck.  It seems to me like he’s an ambitious, dedicated, hardworking business owner who likes firearms.  In my opinion, those are all great qualities.

While I cannot tell just how far he’s shooting in the video, he’s shooting and hitting steel with one hand while hanging upside down.  I don’t care who you are, if it’s real, that’s pretty good shooting.

And I do like his out-of-the-box thinking.  I mean, hanging off a door handle with the door open is really not typical of anything but Hollywood.  But from a purely aesthetics point of view, that’s pretty creative, albeit atypically dangerous and almost impossible to do under stress, but I’ll get to that later.

He also encourages training in his video.  Bravo.  You and I need to train—we’ve got to train right and train hard if we want to survive gunfights. 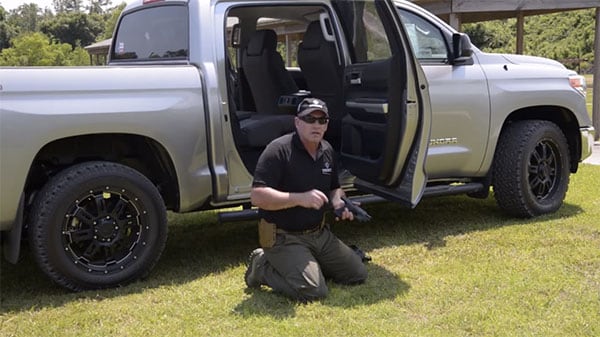 He’s also safe when he drops his pistol before rolling out of his truck and onto his stomach.  Not sure why you would do that but he is safe… for shooting on the range or a closed set and when someone’s not shooting back (i.e. real life).

It is possible to train the wrong way over and over and, thus, ingrain bad habits and incorrect tactics that will get you killed.

Things that are considered safe on the range may, in reality, be dangerous in a real world lethal encounter.  Dropping a gun or setting it down even for a moment isn’t a good idea in any real gunfight and, understandably, there are measures designed for the range use only that will help training such situations.  I’m hopeful the instructor in the video knows that now. 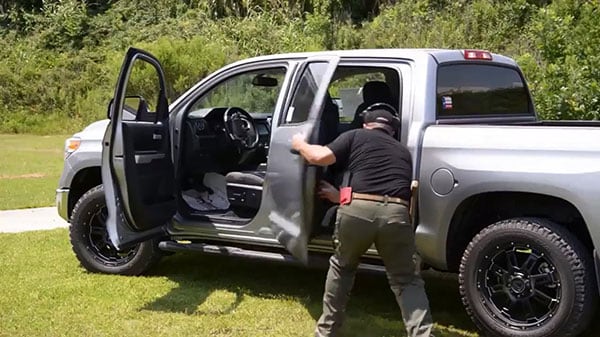 Staying in the car (or moving to the back seat) severely limits mobility in a gunfight (and that’s bad).

It takes about 13-15 seconds for him to move from the front seat to the back seat and begin shooting.  A better option is just to shoot out of the window in front of him.

Shooting accurately and controlling recoil with one hand is challenging.  It’s especially challenging to do while hanging off a door and being in a near-upside down position.  Under stress, well, it’d be nearly impossible to do well.

Getting into a position where you cannot move from quickly can be detrimental to your health.  In the shooting position hanging off the door, he cannot go anywhere but down.  And that can’t be done quickly without falling. 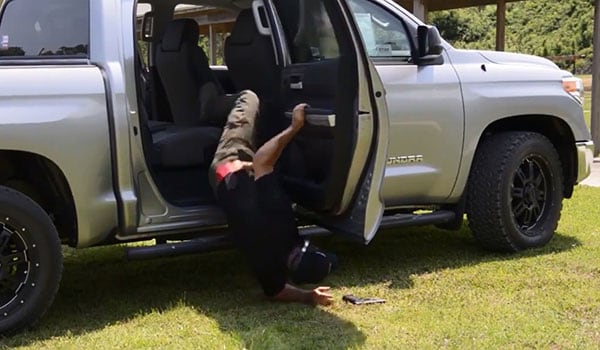 Rolling and falling when you don’t have to is stupid, no matter what you are doing and especially during a lethal encounter.

In most circumstances, being in the prone is not a good position to be in, especially when there’s no cover.  Rounds bounce and skip; they follow along the ground.  In other words, he’d likely be shot in the face or the forehead lying beside his truck.  He’d be better off running away and staying far behind his truck if people were in front of him shooting.

In fact, there appears to be an overall ignorance of cover and concealment and perhaps ballistics. Rounds go through doors.  They notoriously lack the proper resistance to stop rounds.  I suppose a car door is better than nothing, but using a door as cover creates false protection for the most part. 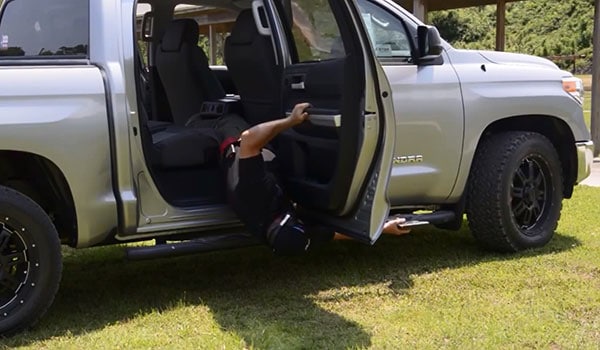 Shooting accurately and controlling recoil with one hand is challenging. It’s especially challenging to do while hanging off a door and being in a near-upside down position. Under stress, this is nearly impossible to do well.

Frankly, I see no reason why you’d get out of the truck and then go to the back seat.  Doing so cuts down on other superior tactical options, like staying in control of the truck and wastes time in the process.  Situation dependent, I’d use the truck to drive just drive away from the threat.  Or, situation dependent, I’d use the truck to run over my attackers.  (If you’re justified shooting someone trying to kill you, you’re justified running them over with a nice truck too.)

Of course, I understand that the instructor was trying to teach fighting from the vehicle.  And since I haven’t seen any of his other videos, perhaps he has already made a video about staying in the front seat and shooting out the window.  That technique doesn’t take long at all. 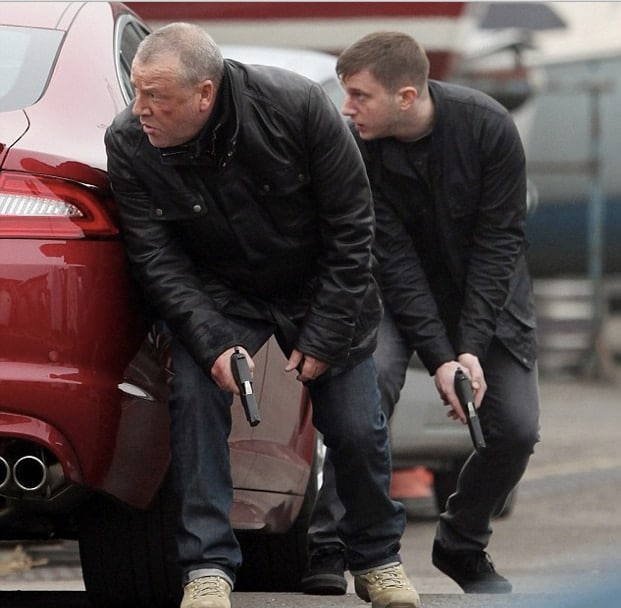 Using the entire car and wheels as cover to avoid ricochet (as detailed in this FBI training video) is most effective in gunfights.

But, in my ultimate opinion, fighting from this type of vehicle just isn’t a good option any way you look at it.   Staying in a car or truck is like staying in a coffin in that you are making yourself immobile. If you’re going to lay down rounds, do so while you’re moving to quality cover and, if the only available cover is a car, getting really far behind the cover of the vehicle with the entire car between you and the threat is best.

It’s easy to critique any short training video.  I’m sure the creator of the video has a lot of range time.  Surely he knows more than what’s shown in a few short minutes.  I still say good on him for creating the video in the first place.  He was thinking out-of-the-box and that’s refreshing and needed; but in the end, in a real world confrontation, I hope I never have to use anything he demonstrates here, because if I do, it means I’ve run out of all options that make tactical sense.