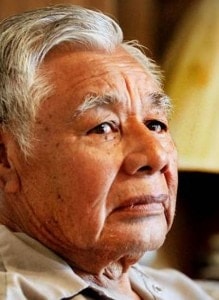 Pete Vasquez said the officer came at him like a Pitbull. (Photo: Victoria Advocate)

A Victoria, Texas police officer was fired Monday after an internal investigation determined that he violated several department policies when he wrestled a 76-year-old man to the ground and used a stun gun on him twice over an expired vehicle registration.

The Dec. 11 incident, which was captured on the officer’s dash cam and has since been widely circulated across the internet, prompted an internal investigation as well as a separate investigation by the Texas Rangers, the Victoria Advocate reported.

The investigation revealed that 23-year-old Nathanial Robinson was in the wrong and had violated three different department policies — conduct and performance, use of force and arrest without a warrant — during the altercation with Pete Vasquez.

The traffic stop, which occurred as Vasquez was pulling into the car lot where he works, was initiated by an expired vehicle registration tag on the car Vasquez was driving, but when Vasquez attempted to explain to Robinson that since the vehicle belonged to the car dealer, it was exempt from vehicle registration, the traffic stop turned physical in a matter of seconds.

Robinson can be seen attempting to grab Vasquez’s arm to handcuff him, but when Vasquez pulled away, the officer wrestled the man to the ground. After a brief tussle, Robinson stunned Vasquez twice.

At that point, the car lot’s sales manager, Larry Urich, confronted Robinson about what he was doing.

“I told the officer, ‘What in the hell are you doing?’ This gentleman is 76-years-old,” Urich said right after the incident. “The cop told me to stand back, but I didn’t shut up. I told him he was a goddamn Nazi Stormtrooper.”

Vasquez was questioned by at least one officer who seemed concerned that he was injured, and then spent the two next hours with authorities at the hospital receiving treatment for his injuries. But in the end, officers released him and he wasn’t even issued a citation because authorities determined that he had done nothing wrong and no laws were broken.

While popular opinion seems to side with Vasquez, not everyone believes Robinson should have lost his job.

“It’s not an example of what the officer did wrong but more of the lack of training the officer received,” said 25-year-old Victoria resident Samuel Sweat. “He doesn’t lack common sense. What he lacks is the knowledge about the plates and the escalation of force. Rules of escalation need to be taught.”

However, Urich thinks the chief “came to the correct conclusion” when he let Robinson go.

“If the officer’s going to react in the situation like this, the way that he did, I would hate to see his reaction in something that was really serious,” Urich said.

Mary Lou Canales, League of United Latin American Citizens District 10 director, stood behind the chief’s decision as well, and said “it shows that the city is looking out for the welfare of the community.”

Nonetheless, Robinson’s legal battles may be far from over. The Vasquez family is hoping for full prosecution against the officer, according to Vasquez’s attorney, Rachel Messer.