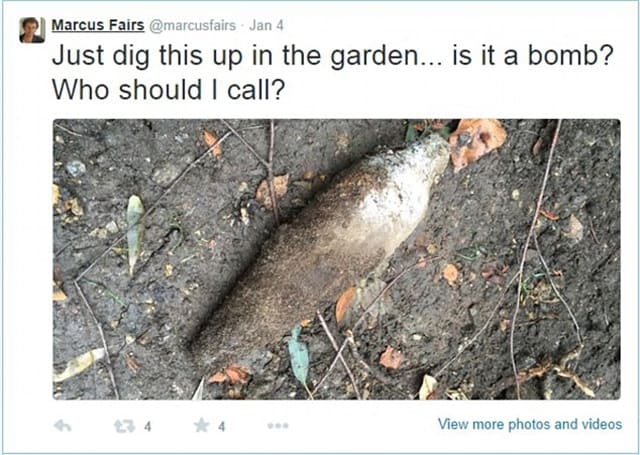 While planting a bamboo along a fence in the back yard of his north London property, Marcus Fairs found something which he described as “exciting” and “interesting.”

“I had dug up a lot of bricks already, because, ironically, there had been an air raid shelter at the back of the garden,” Fairs said. “I was really going for it with the shovel and hit something that was metal and then I hit it again.”

That metal something turned out to be an old World War II mortar round, but Fairs wasn’t exactly sure what it was, so he took to Twitter for help.

“I was a bit nonchalant about it and I picked it up and took a picture and posted it on twitter asking what to do,” Fairs said.

Someone told Fairs he should call the police to handle the matter, but he had more pressing matters to attend to first.

“Before I did that I made sure I finished the work in the garden because I didn’t know if we were going to be evacuated,” Fairs explained.

Within minutes of making the call to authorities, Fairs said three squad cars arrived and took control of the situation.

“All the neighbors knew about it and there was a mixture of excitement and concern over my foolhardiness,” Fairs said. “When the police were examining it in the garden, it was a light-hearted atmosphere, but when the Bomb Squad guys turned up things went a bit hush hush.”

Authorities took the bomb to a nearby park where they safely detonated it.

“I was a bit disappointed when they took it away,” Fairs said, “because I thought it was my bomb and my discovery.”