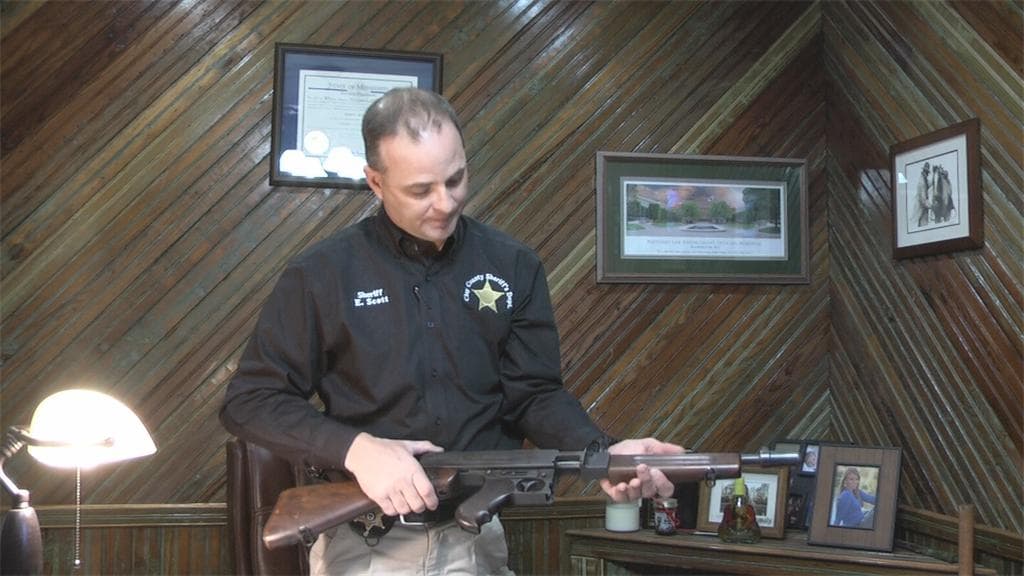 Clay County Sheriff Eddie Scott wants to make a move on his department’s vintage Tommy Gun and use the funds for more modern equipment. (Photo: WTVA)

The Clay County Sheriff’s Department in West Point, Mississippi is looking to offload their gently used M1928A1 Thompson submachine gun to raise funds for the agency.

According to WTVA News, Sheriff Eddie Scott is accepting bids from licensed dealers for the department’s long-held Title II full auto weapon. Donated to the office after World War II, it dates back to 1936 and is still in working condition, but isn’t ordinarily issued out for use.

“No, we can’t use this gun. So basically, even though it’s got a lot of history to it, it would better benefit us as a department to sell this gun to a licensed gun dealer or gun collector. Somebody that wants a piece of history,” Scott told local media.

The agency is accepting bids through Jan. 8 and intends to use the funds from the sale to purchase new equipment for the rural department in North Mississippi.

Scott’s Thompson is not the first in recent years to be passed on by law enforcement agencies to the collector’s market.

Last June the St. Louis city police department sought to auction off 30 vintage Thompson submachine guns, worth an estimated $1 million, to buy new sidearms. The guns were the remnants of over 75 of the iconic guns used by that department during Prohibition. This came after a North Carolina agency made a deal to swap two of the same model guns to a local dealer in return for 88 Bushmaster carbines.

Not far away from Scott’s department, authorities in rural Macon, Mississippi put their select-fire World War II-era Reising Model 50 up for sale after it had spent nearly 40 years locked up in a safe at City Hall.

Like Macon’s gun, the Clay County room broom doesn’t see the light of day much.

“It’s not really of any daily use that I can use for my department so it’s our intent to sell this weapon and turn around and purchase weapons for the department,” said Scott.