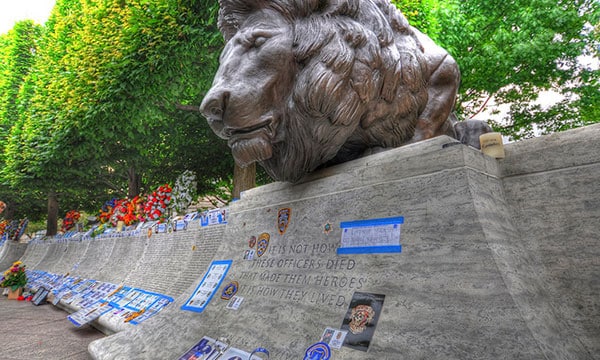 The National Law Enforcement Memorial in Washington DC has the names of over 20,267 officers who have died in the line of duty.

There are 900,000 police officers serving over 319 million U.S. citizens everyday. Every time force is used, the actions of law enforcement are heavily scrutinized, as well they should be.

Every time someone is injured or killed by police, the courts, the civil review boards, and the police administration, including internal affairs, investigate these incidents to the nth.  City councils, mayors, judges and attorneys come down hard on police departments and officers to ensure that the rights of citizens are not infringed.  What a great country to live in where we have Constitutional guarantees and a system of checks and balances to ensure even evil murderers get a fair trial.

But, something is gravely amiss in a country when police are unfairly judged or perceived negatively by the citizens they are sworn to protect and, too often in my opinion, officers experience an ingrained prejudice in the court of public opinion.  I’m not just talking about single officers either; I’m talking about all those who work in law enforcement.  The Law, as they say.

News media work in partial-truths in that the most they ever really provide us is a peek at the truth (or a peek at a lie as is often the case).  The problem with this is that this practice gives many people the false belief that they actually understand what’s going on backstage during these very complicated proceedings just because they saw a news report.

In the scope of most criminal cases, that’s simply not possible and folks need to realize that this isn’t the willful obfuscation of justice, it’s most often just the reality of the situation.  For instance, there were literally hundreds of pages of evidence in the Ferguson shooting case nobody but those assigned to the case were privy to, under existing laws, during the subsequent legal proceedings.  This evidence was presented at the trial.  The officer was cleared.  The courts judged his actions reasonable and justifiable.

Yet that officer and his family will continue to receive death threats for months and years to come.  Where is the justice in that?

It’s my opinion, and I believe the honest assessment of many, that, in the environment that many members of the media chose to portray following the incident, the criminals would have rioted in Ferguson even if the officer hadn’t been cleared.  And frankly, that mob mentality of bullheaded “righteousness” is the same stupid behavior that gets people and police hurt in the first place.

Since the officer involved shooting at Ferguson, about 40 police officers have lost their lives in the U.S.  Nearly 15 of those were murdered with guns.  Where’s the outcry about that?  There were 52,901 officers assaulted in 2012 and 49,851 in 2013.   Since not all police departments report statistics to the FBI Uniform Crime Report, those numbers could be much higher.

Ninety-five officers were killed in the line of duty in 2012.  Of that number, 48 of them were feloniously killed—they were murdered.  Seventy-two were murdered in 2011.  Only 27 officers were murdered in 2013.   But what does that really mean? That’s 27 too many!  That still means that 27 lives were ended because someone else made the decision to kill them.  Assuming they were all married, that means 27 widows and many more children who are now fatherless.

Over 40 officers were shot and killed in the line of duty in 2014.  And those are just the officers who died by gunfire!

What causes all of this?  First, it’s not about race.  Second, it’s not about all police being heavy-handed.  Obviously, if police were more heavy-handed, there would be a lot more citizen deaths, but, as shown above, police are losing their lives. The National Law Enforcement Memorial in Washington DC has 20,267 names who’ve died in the line of duty.  I personally keep in touch with the widow of one of my good friends whose name is up on that wall.

Well, true or not (I don’t believe that this is as true as many working in the media would like to think that this is), the consequences are at best, deliberately distorting the public’s perception of important news and, at worst, creating a false panic that could get people hurt.  When the headline reads “Grand jury fails to indict police officer” that’s absolutely taking sides. The wording makes it appear that the jury and the fair trial system let a guilty go who should have been punished.  The bigger problem is that such statements by supposedly objective news sources can be dangerously misleading when widely disseminated (like say via the Internet).

So, maybe a better way to think about this all is this: when the media reports things in a way that stirs up contention for the sake of increasing circulation and their statements are tacitly anti-police, who has the power to really call them out?

Now I’m not saying that there aren’t mistakes in police work.  I’m not excusing any officer who has made bad decisions, has been heavy-handed or let their personal flaws get in the way of performing their duties.  Certainly there are rotten apples, and in my experience they usually lose their jobs pretty quickly.

What I am saying is that for the most part, police officers are good, decent, hard-working people — people just like you and everyone else you know–who do everything in their power to protect the rights of both the innocent and the guilty.  And because they take their job seriously, it takes a lot of time and care to investigate use of force actions based on an “objective reasonableness” standard of the law.  So, to lambast all police officers and the job that they must perform for our U.S. legal system to run as intended is just plain wrong.

But the said, the truth is that you hardly ever find this sentiment expressed by the mainstream media. Unfortunately, I find that any narrative that includes an appreciation for what officers deal with on a day-to-day basis gets buried deep under piles of media manure. Thankfully, not all reports–some media personalities actually appreciate what officers do, even if they don’t understand what law enforcement officers deal with and for them I am grateful–but most seem blind to the realities of police work or willfully ignore them, perhaps in service of their own agenda.

In closing, don’t let the media feed you crap.  And if they do, for sure, don’t take a bite.