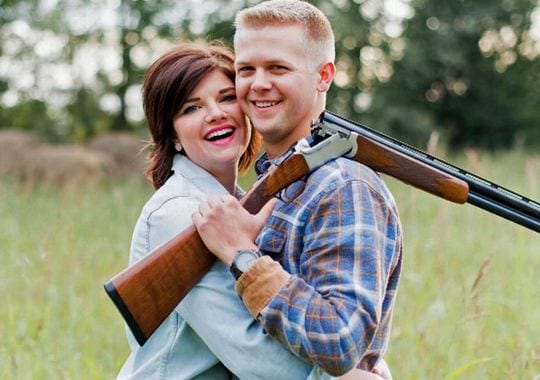 A Dallas department store clerk refused to print this picture of Stephanie Wehner and her fiancee Mitch Strobl due to the fact that it contained a firearm. (Photo: WLAA)

When Stephanie Wehner went to pick up a set of photos of her and her fiancee, Walmart told her it was not their policy to release images that contained weapons.

The photo in question was one of a set of 13 of the happy couple posed together in preparation for their upcoming wedding. While the other 12 were released, the image of the two that included fiancee Mitch Strobl holding his Ruger Red Label shotgun was withheld.

“She was very nice, but very matter-of-fact, like she was not going to budge or give me my photo,” Wehner told WFAA-TV.

The reason for the refusal? The clerk advised that it was policy to not print pictures that included weapons due to the fact that it, “encouraged gang culture.”

This came as a shock to the couple, but especially to Strobl who posed with the action of the over and under shotgun open to show it was unloaded, and with the muzzle pointed in a safe direction. The avid shooter, in fact, helps produce online hunter’s education and safety videos.

For its part, Walmart, when contacted by local media, advised that the employee in question was misinformed and the chain had no such policy of refusing to print photos that included firearms. Further, while the broad terms of use posted by the retailer for its photo services reserves the right to not assist in the copying of a photograph for a number of reasons to include depictions of criminal activity or offensive language, firearms are not mentioned.

This is not the first time that portraits that included avid sportsmen with their firearms have drawn criticism in recent months. In December, a New York teen had to take her fight to the local board of education after school officials refused to allow her senior portrait to include her hunting rifle.

This came on the heels of a campaign by PETA against a Nebraska high school who granted permission for seniors in their district to submit tasteful portraits that included firearms.

As for Wehner and Strobl, they intend to find another outlet to print their now-controversial picture.