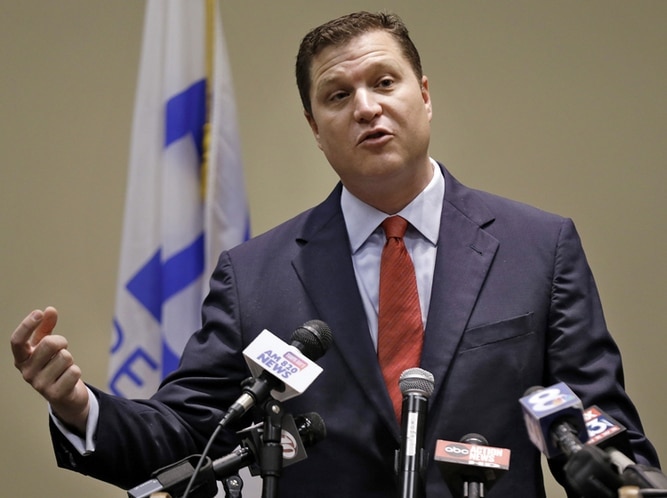 Florida State Sen. Jeff Brandes (R) is seeking to guarantee residents of the Sunshine State the ability to take their firearms with them for protection when things aren’t so sunny. (Photo: AP)

A bill to allow law-abiding citizens without concealed carry permits to bear arms during declared mandatory evacuations in Florida has been reborn for the new legislative session.

The measure is essentially a reboot of a bill introduced last year that was dramatically killed by last minute amendments after dramatic politics in the state legislature.

As open carry is largely prohibited in Florida, evacuees without a concealed carry permit cannot legally take their firearms with them in times of emergency. The reform bill, sponsored by state Sen. Jeff Brandes (R-Petersburg), would change that.

Brandes’ bill, SB 290, would allow a person to carry a concealed firearm, as long as they are able to lawfully possess that firearm, even without a permit to do so during a mandatory evacuation order during a declared state of emergency.

Such orders occur frequently in the state, most often associated with hurricane threats. Florida, with hundreds of miles of coastline in the North Atlantic and Gulf of Mexico, is prone to severe hurricanes. Since 2000, no less than 63 tropical or subtropical cyclones have affected Florida, more than any other state.

The Florida Sheriffs Association, who lobbied to limit the circumstances under which an evacuee could carry concealed without a permit, and how long the exception would be allowed, opposed Brandes’ previous measure. The 2014 bill was withdrawn after lawmakers attached a limit on the period of 24-hours or whenever an evacuee reached their destination, whichever came first.

When asked by Guns.com if the FSA intended to stand against the new bill, association spokeswoman Nanette Schimpf said that they are studying the measure but, “We do not have a position or comment until we review and discuss with our legislative committee,” which Schimpf explained would take place next week.

Gun rights advocates in the Sunshine State, however, are backing the measure in what they feel is an exercise in common sense.

“In a hurricane prone state like Florida, this bill is a no-brainer,” Marion Hammer, founder of Unified Sportsmen of Florida and the National Rifle Association’s lobbyist in Florida, told Guns.com Friday. “When families are ordered to evacuate their homes they must take their children, pets, and personal valuables and flee. They need to be able to take their guns with them for protection — it’s that simple. You have to seriously question the motives of anyone who opposes that.”

While Florida, who passed ground breaking shall-issue legislation for concealed carry in 1987, currently has over 1.3 million permit holders, those without could find themselves having to make hard choices, explained Hammer.

“Leaving your guns behind where they can be stolen by looters and gangs poses a greater danger to law enforcement, first responders and any military that may be called into the area,” said Hammer.

While several states have passed legislation in recent years, including Mississippi and Louisiana that would prohibit the seizure of guns during disasters, the Florida bill would be largely unique in its scope in providing temporary Constitutional Carry abilities.

For Hammer, the emergency carry legislation is a fundamental Second Amendment issue.

“The Constitution guarantees the right to keep and bear arms — and ‘bear’ certainly means to carry with you. This bill brings Florida law into compliance with constitutional guarantees,” explained Hammer.

Senate Bill 290 is set for legislative review in the current session.