SilencerCo has just dropped the details about the recently-teased Omega high-performance centerfire rifle suppressor, a multi-caliber can optimized for magnum .30-caliber rifle cartridges while still delivering solid performance down to rounds as small as FN 5.7x28mm.

As predicted, the Omega combines design elements from SilencerCo’s new Saker and Harvester designs; “elements” being a crucial part of this suppressor’s description. The actual can is in a class all its own.

New for 2015, the Omega is SilencerCo’s shortest and lightest .30-caliber suppressor at just over 7 inches long and weighing in at only 14 ounces. Constructed from titanium, stainless steel and the proprietary Stellite alloy the Omega is rated up to .300 Winchester Magnum. 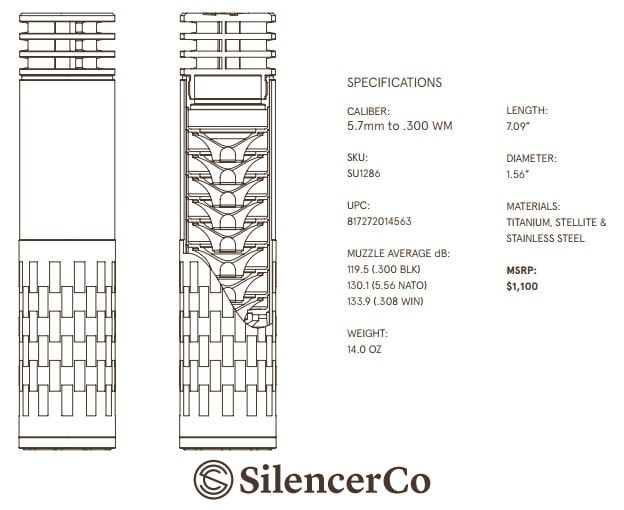 SilencerCo has rated the Omega at 133 decibels with .308 Winchester, 130 decibels with 5.56 NATO and 119 decibels with 300 AAC Blackout. It’s completely full-auto rated as well, making this not just a good performer, but definitely a hard-use suppressor as well.

The Omega is modular, with direct-thread and quick-detach mounting systems standard and an interchangeable end cap system that comes with an integral Anchor Brake end cap by default. Alternate end caps can be used such as flash hider caps and plain, featureless caps for users who want the shortest, lightest package possible.

The use of interchangeable end caps allows users to easily replace the front end of the silencer in the rare cases of baffle strikes. The last baffle, in this case not a true baffle but the end cap, is the most commonly-damaged part of a suppressor. With this system it’s a consumable, user-replaceable part that doesn’t need to go back to the shop for service.

The Omega comes with mounts for 5/8×24 threads, which is commonly found with many .30-caliber barrels, including a direct-thread adapter and a Specwar Trifecta muzzle brake for a quick-detach mount. Other mounts are available for host firearms including Specwar brakes threaded for 1/2×28 barrels.

Naturally other mounts and accessories are sold separately. We’ve got our fingers crossed that SilencerCo will offer the Omega in other packages since it’s an attractive option for people who would prefer it were bundled with 1/2×28 mounts instead, without having to pay extra for the option.

With an MSRP of $1,100 it’s not the cheapest can on the market — even though real-world prices are sure to be lower — but given its all-around excellent performance and advanced design, people will line up for a chance to pick up an Omega of their own.

Like with all SilencerCo products  the Omega has a lifetime warranty. For more details and specifications visit the SilencerCo Omega product page.