Terrorists by definition terrorize.  It’s sometimes easy to forget, with all the media panache surrounding these scum, how cowardly a method this is to achieving ones’ goals.  Perhaps in these moments, when terror both serves the means of the enemy and stifles our own production, we should look to Ronald Reagan who perpetually made fun of Communists for wielding the hammer and “tickle”.

While I can’t joke as well as Reagan could, in truth, the violence that recently occurred France is no laughing matter.  However, we can never afford to show any fear to these terrorists in Paris or anywhere else in the world.  Instead, we should analyze their mindset and tactics and be prepared to stop them.

And before giving these bozos in balaclavas any credit for tactical prowess, let’s take a closer look at the pie on their faces. Because there is a lot of it.

A ridiculous and weak mindset

I have no problem poking fun at terrorists.  After all, if the terrorists’ agenda is to strike fear into people and societies, itself an act of psychological warfare, I feel we should adopt our own brand of psy-ops to counter-attack.  In his book, Deep Survival: Who Lives, Who Dies, and Why, Laurence Gonzales, wisely states that “Laughter makes the feeling of being threatened manageable.”

Dark humor has long helped many troops deal with the stress of the job — though, like any type of humor, some people just won’t ever understand it and that needs to be taken into account as well when practicing it.  Laughter is powerful, and it needs to be wielded respectfully and with precision.

What I’m trying to say is that we cannot afford to unintentionally offend good Muslims while intentionally offending foolish criminals.  I don’t believe people should make fun of religion; Islam or any other faith for that matter.  I don’t like anyone making fun of my religion.  It’s fundamentally un-American.

So, before making fun of the tender personalities of these knuckleheads (i.e. the black-hooded thugs who murdered an unarmed police officer and shot newspapers workers to death), it’s important to remember this caveat.  But it is also important to add this one: sometimes cultural beliefs are stupid.  And this means that under no circumstances should a society or individual consider taking innocent people hostage to be heroism; it’s a desperate plea for attention and a motivation of their own incompetence.

Nancy Kobrin, a psychoanalyst who has been called the “Dr. Ruth of Counter-terrorism” and who has a PhD in Arabic languages, has an interesting theory about these men.  In her book, The Banality of Suicide Terrorism, she essentially suggests that the entire terrorist culture has some serious mommy issues.  She said in an interview that these terrorists come from a Muslim culture where:

This creates tremendous ambivalence, on the one hand to want to bond with mother (ummi) and on the other hand at the same time remain terrified of her, resulting in a confusing sense of identity.

If we could put [Middle Eastern terrorists] on the couch we might suggest they are in desperate need of a sex education [because they are] depriving themselves of very basic human needs. The irony is that they shame/blame everyone for depriving them but ultimately they are the real ‘deprivers’. So instead of love for the mother/female, the replacement becomes the destruction of her.

In psychodynamic terms this is known as “primitive envy”. In essence the very love that is required to maintain healthy bonds, is the very thing that makes them feel powerless and impotent so they must defend against this by becoming killers and murderers.

So, they want to love their moms and their sisters, but they hate them too and the result is “honor killings”?  What’s it matter why when we all have to pay the price?

Yes, learning more about the mindset of these weak-brained killers does make me feel sorry for them in a way.  But I don’t feel sorry for people who commit heinous crimes.  You can find my thoughts on that here.

The talking heads keep calling these losers well-trained and saying that their attacks were superbly coordinated.  That irks me to no end.

These guys executed their operation with highly trained skill? Are you kidding me?! Just because they held their guns to their shoulders doesn’t mean they know what they’re doing or that what they were doing really takes a high degree of “skill” to pull off.  Any 12-year-old kid familiar with Call of Duty can hold a gun (and pull a trigger) these days. And who couldn’t do an adequate recon with the simple tools available to all on the Internet?

I’m reminded of what the terrorism guru, Bruce Hoffman said in his book, Countering the New Terrorism.  He wrote, “The proliferation of amateurs taking part in terrorist acts has also contributed to terrorism’s increasing lethality… [T]he means and methods of terrorism can be easily obtained at bookstores, from mail-order publishers, on CD, or over the Internet.”

No, what these fools “accomplished” was not the product of training, it was the product of twisted thinking and cowardly inclination.  That’s all.  Attacking soft or defenseless targets is not a monumental feat of ingenuity by anyone’s standards, let alone actual operators.

Which to me is these guys all over because they just look totally behind the times, right down to the wardrobe.  I mean just look at them. 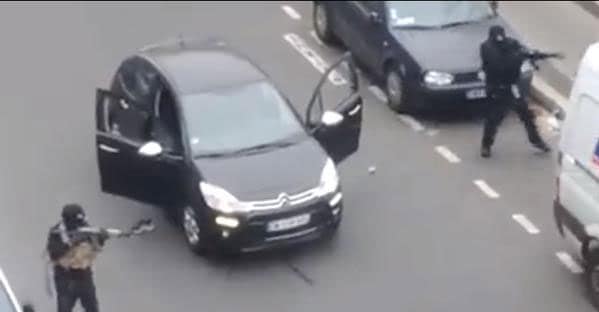 They went all black in the middle of the day.  That’s terrorist old school.  Like ‘72 Olympics old school.  And you don’t need to keep wearing balaclavas once your faces are all over the news, fellas.  The Internet says welcome to 2015!

There’s a big difference between what’s tactical and what’s tacticool and these wastes of flesh fail at both.  So let those who would still follow the path of terror take heed my warning: if you have “mommy issues” (which I believe is obvious these guys do), go see a mental health counselor and spare everyone your drama. And the next time you feel like hurting someone, stick to your video games.   Because if I see somebody doing something like taking hostages or shooting innocent people I’ll kill them.