My pick for the new Army pistol caliber 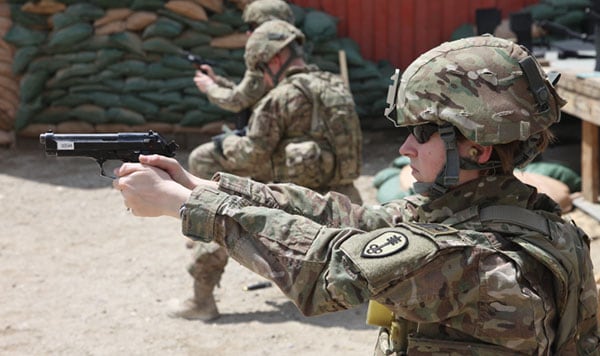 US Army Soldier fires a 9mm Beretta M9 92F pistol, soon to be replaced by the army’s new modular handgun system and possibly in a new caliber.

The US Army has decided to do away with the Beretta 9mm.  Good.  There has long been talk of going to a bigger caliber.  One thing is certain: if the military developers choose the wrong pistol caliber, they’ll be very sorry.

The squabble over pistol caliber rounds is interesting to me, but really, that’s about it.  My thinking is and has always been that though power is important, accuracy with the weapon is far more important.  And too often accuracy and weapons handling skills are forgotten during these pistol caliber debates.

If a troop can shoot someone in the eye with a 9mm or with a .45, it’s not going to make much of a difference which round is more powerful.  (I have a friend in the service who shot and killed a suicide bomber with his Beretta 9mm.  I now know firsthand that a 9mm round will stop a threat if you can hit your target.)  This principle cannot be lost in any conversation about the best military pistol caliber: accuracy is more important to success in a gunfight than the size of a small bullet.  More holes are better than one or two holes.

It’s no mystery that more ammo is better.  I wasn’t the first to say it, but I agree with whoever was, “The only time you have too much ammo is when you’re swimming or on fire.”

Now, if we were arguing that a 12 gauge slug outperforms a 9mm or a .45, okay, I can see your point and I like that debate too, but a 12 gauge will never serve the same function as a handgun in combat so, that’s not what we’re talking about.  After a certain point the differences in a pistol round mean nothing to me when it comes to combat, unless of course they affect accuracy.

Frankly, I believe that the .357 Sig, the 40S&W and the .45ACP have too much recoil for most shooters to make rapid, accurate shots under stress with minimal training. That’s not to say any one person couldn’t learn through practice and education to shoot these calibers rapidly and accurately. Far from it. But from what I’ve seen professionally and otherwise, I don’t think most shooters can manage recoil from these calibers as effectively as they can other rounds that can potentially do equivalent damage. (Though, it would also be foolish to go with a much tamer round, say a .38 Super round, on account of global availability.)

Shooting multiple rounds on target or into multiple threats (Tangos) quickly because of good recoil management, and dialed-on tactics, is a heck of a lot more preferable and dynamic than banking on a couple of slower shots from a “one and done” handgun.  In my world, there is no such thing as “one shot, one kill” when it comes to pistol calibers.  Save that talk for long range snipers. During a deadly attack, you need to shoot your pistol, and then keep shooting more.

Take two guys: one with a 9mm and one with a .45 ACP.  If the first is fast, accurate and his fundamentals are strong, he’ll beat the guy with the larger caliber every time in a gunfight.

Which speaks to the bottom line: when it comes to learning to shoot pistol, tacticians and practice are needed and there simply isn’t enough time to make everyone in the military a whiz with a secondary weapon.  Training on these weapons may be quite limited for some individuals and this information will factor into any decision the military makes in regard to weapon or caliber.

Also, it should be no mystery that more ammo is better.  I wasn’t the first to say it, but I agree with whoever was, “The only time you have too much ammo is when you’re swimming or on fire.”

In my opinion the hard kick of anything over a 9mm will make for even poorer shooters and make it too difficult for many to get back onto target quick enough.  Flinching and anticipation increase as caliber increases.  I’d keep the 9mm ball ammo for training, but for combat purposes, I’d opt for the Speer Got Dot JHP in 147grain for added punch and expansion.