A Florida county may evict Colt for failing to fulfill deal 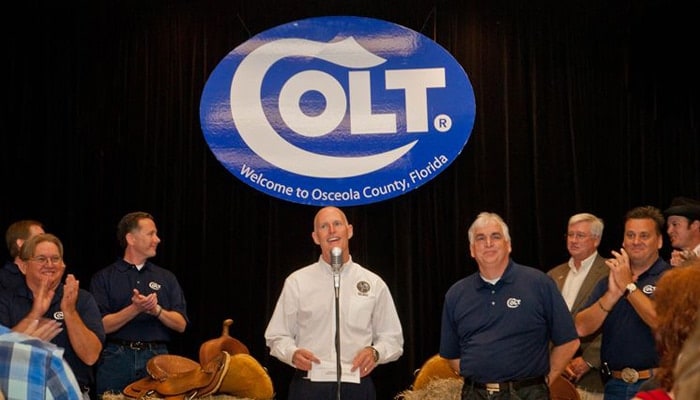 The Florida county that agreed to lease a 16,000-square-foot facility to Colt’s Manufacturing Company LLC is reaching the end of its rope as the famed gun maker has failed to keep its end of the bargain.

Osceola County is asking Colt to comply with an agreement they reached in 2012 or it may evict the company to make way for a willing employer.

“It’s not fair to our citizens to let a prize asset sit empty. Especially when the economic climate is improving and we are confident we can find partners who will create good-paying jobs at this facility,” Fred Hawkins, Jr., chairman of the board of county commissioners, said in a statement.

As part of the agreement, the state gave Colt $250,000, which the county used to improve the facility, to open its regional headquarters in Osceola. Also, the county invested about $500,000 to upgrade the building so the Connecticut company could set up shop in the area, about 45 miles south of Orlando.

In return, Colt was to invest another $2.5 million in the building and create 63 jobs by the end of 2015. However, the company has already missed a pair of the state’s annual benchmarks to create 20 full-time positions.

With hopes of encouraging Colt to comply with the agreement and getting the ball rolling for future endeavors, the county penned a letter reminding Colt of its obligations and also seeking rent and proof of insurance.

“It’s unfortunate they haven’t been able to meet their commitments,” said Viviana Janer, vice chairman of the board of county commissioners. “At the very least Colt needs to comply with its contract and if that is not the case, we need to take the appropriate action to move forward and create the jobs our community needs.”

In a statement to Guns.com, a Colt spokesperson said that the company is still discussing future plans for the property with Osceola County.

Colt struggled through 2014 despite a spike in sales in 2013, among many other gun makers, and is now dealing with an uncertain financial future.

In November, Colt pushed reporting its third quarter results so it could focus on securing enough money to pay bondholders or risk default. While it was able to shore up enough funds — a $70 million loan — to pay the $10.9 million it owed in secure notes and repay a previous loan, the company warned that it may miss the next payment in May.