What started out as a family trip to a local shooting range in Hot Springs, Arkansas, for a little “father-son time” ended with the duo being asked to leave allegedly because of the color of their skin, but the range owner, known for her no-Muslims rule, claimed it was because of their “irrational” behavior.

The son, who did not wish to be identified, contacted the Arkansas Times following the incident, and has since talked with other media outlets, because he wanted the public to know about the events that transpired.

“My dad and I used to go to this gun range, but we haven’t had as much of a chance to go in recent years since I’ve been at college,” he said. “It’s changed ownership recently.”

Jan Morgan now owns The Gun Cave in Hot Springs. She made headlines in September when she declared the facility a “Muslim-Free Zone.” Opinions were divided on the controversial move and a month later The Council on American-Islamic Relations asked state and federal officials to investigate the facility.

People also questioned how Morgan could tell whether or not a person was Muslim, but no clear answer was presented.

The young man said when he and his father went to the range over the weekend, they were immediately drilled. “When we went in, a woman asked, ‘Where are you guys from?’” he said, responding that they’re locals.

“She mentions that this is a Muslim-free gun range and if you are then please leave,” the father told a local Fox affiliate. He explained to her that they were Hindu, not Muslim, but then began asking about the “Muslim-Free Zone” policy.

“Then, all of a sudden, I don’t know what went wrong, but she stopped us from filling out the paperwork and said, ‘I don’t think you guys should be here.’ She told us to leave or she’d call the cops on us,” the young man said.

He said after she made mention of not allowing Muslims, he remembered reading about it, and then started connecting dots. He said they just “wanted to have some fun and shoot some guns,” not trouble, so they left.

“We’re brown,” the son said. “I don’t know if she assumed we were Muslim.”

He added that Morgan brought up the issue, saying, “’I would hope if you were Muslim, you guys wouldn’t be cowards and would be up front about it.’”

He said his father is from South Asia, but he was born in the United States and he considers Hot Springs his home — it’s where he’s lived for 10 years before leaving for college. “It’s definitely crazy that there’s such intolerance,” he said. 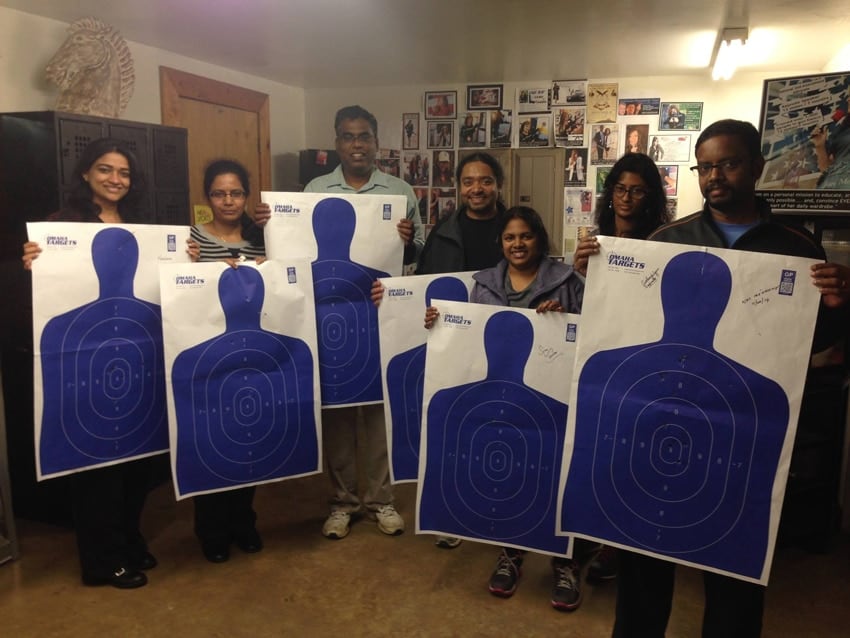 Jan Morgan said she isn’t racist and they have “a number of people with all colors of skin” who frequent her gun range. (Photo: Facebook)

Morgan responded to the allegations on her store’s Facebook page Wednesday morning, calling the allegations “reckless” and that “a number of people with all colors of skin who shoot here, including Indian / Hindu religion folks who have joined our membership and some of them actually have sought out my services for private training, which I provided.”

Guns.com reached out to Morgan, who repeated that she does not discriminate against race and cited the photos posted on her Facebook page of Hindu patrons as proof.

“My decision had nothing to do with their skin color,” Morgan told Guns.com. “We turn away people if they exhibit any behavior that indicates they would present a safety risk to others in the range.”

“Their behavior was irrational, therefore, I was not comfortable allowing them to handle loaded guns in close proximity of our other members who were shooting here at that time,” she added.

Morgan also said that at the same time the father and son were at the range, there was another patron “whose skin color was exactly the same as theirs.”

However, she claimed the two men were “too out of it or busy with their own behavior to even notice.”

Morgan then reiterated that turning them away was a matter of safety. “We do not allow anyone to handle firearms here if their behavior indicates they are under the influence of alcohol or drugs,” she said.