Recently a friend from Utah showed me an incredible YouTube video featuring a guy “tapping and racking” and not in the traditional tactical sense (i.e. performing a remedial malfunction), but covering Anna Kendrick’s audition song in the musical comedy “Pitch Perfect.”

The young man‘s mastery of the rhythm is superb, his weapons handling solid and the tunes downright catchy (well unconventionally catchy to a gun guy like myself).  Apparently, a couple tens of thousands liked the music too. Currently the video has received close to 3.5 million views.

But another thing caught my attention when I first saw it. “Hey,” I thought to myself, “I recognize those mountains”—the Rocky Mountains which is also to say my back yard.  This revelation lead to me catching up with Jim Huish, the guy responsible for the content.

The first thing I did was compliment Jim on his safe weapons handling.  It’s not a good idea for just anyone to try what Jim can do with a loaded firearm, let alone broadcast the results over the web, and the fact that he is providing an example of skill, creativity and safe weapons handling added greatly to my enjoyment of the video.

Jim’s experience with handguns is clear, so the second thing we touched on was where he learned to shoot. Huish credited his three brothers—an Army medic, a police officer, and an avid gun enthusiast.  “I’ve learned everything from those guys.  Well, except music.  I learned that from my dad,” he told me. 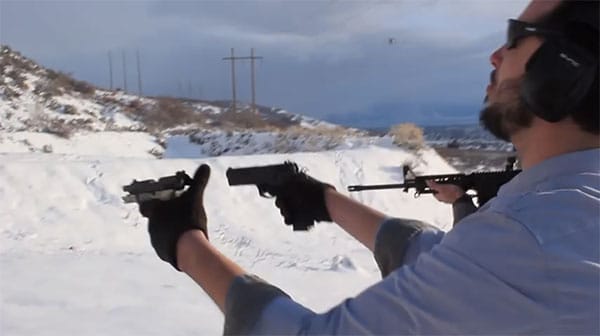 Jim Huish is a singer.  His Nashville trio is called Amber’s Drive.  Over the Christmas break, he came home and, during his down time, decided to grab some guns and make some music,

It’s a concept he clearly had to put a lot of thought into.  In order to make the music sound just right at parts, Jim had to hold on to the slide, riding it forward. (Of course, when operating a gun, you want to avoid riding the slide since it’s not as fast and tends to keep the gun from going into battery, which can invariably cause a malfunction.  Not a biggie.  It’s for the music, man.)

He also shoots—excuse me, plays—a pistol with both his left hand and right hand at the same time.  While dual wielding guns is about as Hollywood as you can get, Jim was safe about it at least and uses the gimmick to full effect musically speaking. While doing so, he also displays some amazing dexterity.

If you watch closely, you can catch the slide sticking with the pistol in his left hand after the 30 second mark.  A few things can cause a slide to stick and not go into battery (e.g. a dirty gun, not enough lube, bad ammo or a bad spring, etc.) and usually, a tap, rack combo works best in that situation—meaning tap or seat the magazine and then rack the slide.  But the singer has a gun in his other hand making that method of remedial action unsafe to perform.

Instead, Huish casually reached up and pushed the slide forward with his thumb to get it going again, never missing a beat and staying on rhythm.  Most viewers probably didn’t even pick up on that unless they watched it a few times.  I thought it was very impressive. 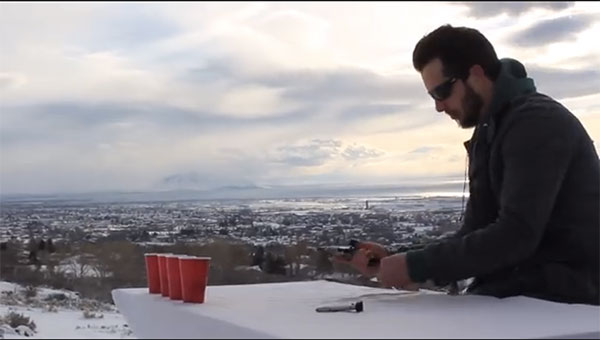 From this angle, you can really see that he keeps his finger straight and off the trigger.

Needless to say, Jim Huish is an interesting guy in more ways than one. During our conversation, I also learned that he speaks fluent Japanese after spending two years in Japan on a mission for the Church of Jesus Christ of Latter-day Saints.

Firearms play a very important part in Mormon history.  John Moses Browning was both a Utahan and a Mormon.  Browning’s father was a gunsmith and a devout member of the faith who migrated to Utah in the mid-1800s, following the assassination of Joseph Smith.

Today, there is still a tiny gun shop with a couple of old guns behind glass in Nauvoo, Illinois on the Mississippi River, where Mormons settled, prior to moving westward.  The rest of the Browning museum is located in Ogden, Utah.

This connection may make one wonder why Huish sings about whiskey in his songs.  Devout Mormons are teetotalers meaning they don’t drink at all.  Well its all about paying homage to tradition and, singing about hooch doesn’t mean he partakes. Perhaps next Jim should follow another music industry tradition and record his hit song again in Japanese.