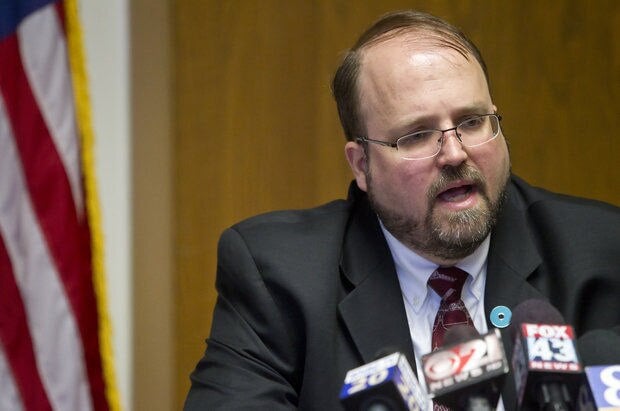 Its official: Harrisburg Mayor Eric Papenfuse has a lawsuit on his hands (Photo: Penn Live)

In the first test of a new and controversial Pennsylvania preemption law, U.S. Law Shield and two individuals filed a lawsuit Tuesday against five Harrisburg city gun ordinances that are stronger than state law.

The 52-page lawsuit is brought about by the Texas-based legal defense program on behalf of two of its members against Pennsylvania’s capital city under the new law signed by Gov. Corbett (R) last year, which gives legal standing for membership organizations rather than individuals to take on local gun laws in the state. The suit takes aim at a series of local statutes mandating the reporting of lost and stolen firearms, possession of guns in city parks, discharge of weapons in the city limits, and the use of guns by minors.

“The law is clear and what Harrisburg continues to do in thumbing its nose to the law is illegal and wrong. I won’t stand for it,” Todd Hoover, a retired Pennsylvania State Police Trooper and one of the individual members named as plaintiffs in the suit told local media.

According to court papers, the two plaintiffs visit city parks but cannot carry their otherwise legal firearms there due to Harrisburg’s ordinances. Likewise, the case protests a law that gives the city power to prohibit the display of guns during a declared emergency, the possession of guns by someone under age 18, and the local requirement to report lost or stolen firearms, none of which are backed up by state law. Finally, they cite the city’s strict rule against any sort of firearm discharge that occurs away from a shooting range. This, they claim, would make it illegal under city law to fire a gun even in self-defense.

“Defendants have instituted an overreaching restriction, which fails to even provide any exceptions for the discharge of a firearm in the justified use of deadly force…”, explains the filing prepared by Justin J. McShane, an area attorney and the second named USLS member in the suit.

Pennsylvania’s new law, now codified as Act 192, was declared the strongest firearms preemption statute in the country by the National Rifle Association when Corbett signed it last October. In allowing member organizations to sue cities in the Commonwealth, litigants did not have to show injury to seek relief in the courts, but only to have a local member. U.S. Law Shield, with its 615 Pennsylvania members, is the first group to file suit under its aegis although a number of other groups to include the NRA have threatened litigation.

Since its adoption, state Democrats allied with gun control groups have sought to repeal Act 192 while Pennsylvania state Attorney General Kathleen Kane has refused to allow her office to defend threats to the new law. Harrisburg has refused to repeal their ordinances even while other cities in the state are rolling back their own gun control laws to avoid legal challenges.

While Harrisburg Mayor Eric Papenfuse has not made comment on the pending litigation against the city, state lawmakers fighting Act 192 are speaking out against it.

“People have to deal with these lawsuits which are nothing more than harassment against the citizens of whichever municipality is sued,” state Sen. Daylin Leach told Penn Live.

As noted by USLS, Harrisburg, which just came out of state receivership in February of this year is self-insured which means that if the suit, which seeks not only injunctive relief but also damages is victorious, it could mean a major financial hit for the cash-strapped city.