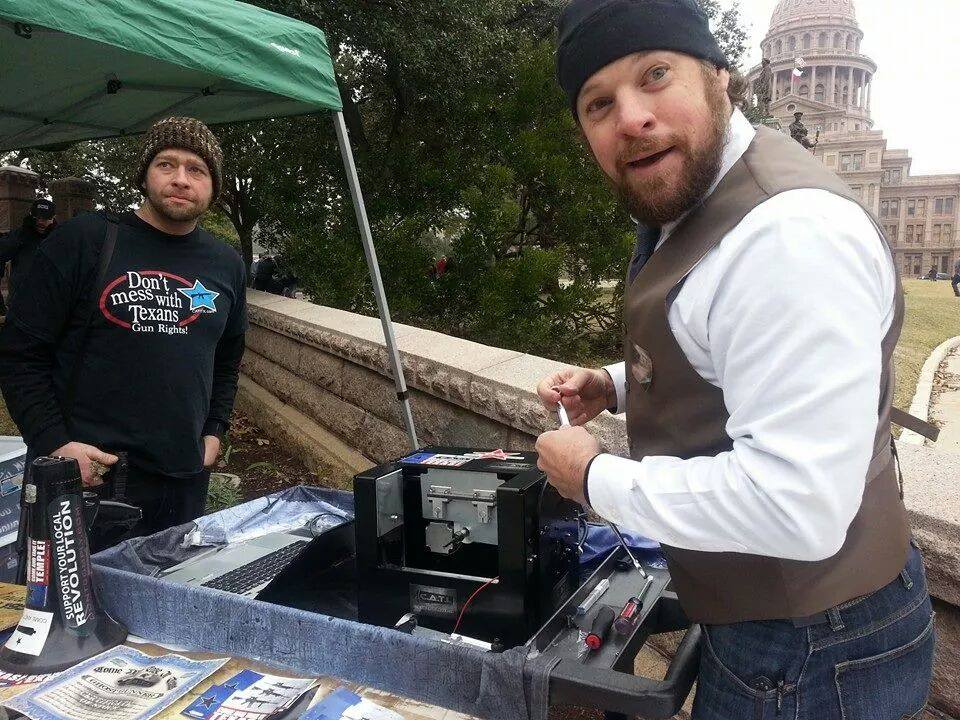 Members of Come And Take It Texas complete an AR-15 lower receiver at the Texas Capitol while showing support for Constitutional carry Tuesday. (Photo: CATITX)

A number of open carry advocates held a rally at the Texas Capitol that included tense visits with lawmakers and, historically, finishing a homemade firearm receiver on site.

The event, planned by Come And Take It Texas for the start of the Lone Star state’s 2015 legislative session on Jan. 13, was part of the gun rights group’s efforts to advocate for passage of a bill to expand firearms carry in Texas. The group used an experimental Ghost Gunner CNC machine to complete an 80 percent AR-15 lower receiver blank into a functional firearm on location.

While espousing a number of pro-gun reform concepts, the primary reason for the rally was to throw support behind House Bill 195, which aims to scrap the state’s current concealed carry permit process in favor of free and unlicensed constitutional carry.

“We came, we saw, we delivered, we manufactured,” read a statement on CATITX’s social media page. “It made history and we were all part of it. HB 195 will be a reality. Too many people are giving everything they have to make this a reality for this not to happen”

Austin-based Defense Distributed, producers of the world’s first 3D printed firearm, developed the Ghost Gunner system used at the event. The device is essentially a simplified desktop CNC machine that allows a user with no prior manufacturing skillset to produce a working AR-15 lower receiver from almost any mil-spec 80 percent receiver blank due to pre-loaded software.

Gun control advocates, terming the open carry group, “extremists,” were quick to decry not only the event but also the legislation backed by it.

“Make no mistake: expanding open carry is simply an attempt by the gun lobby to make it acceptable for anyone to open carry guns everywhere, no questions asked,” said Texas Chapter of Moms Demand Action for Gun Sense in America volunteer Claire Elizabeth in a prepared statement obtained by Guns.com. “In fact, HB 195, the bill Come and Take It Texas supports, would allow the open carry of handguns without any permit requirements, not even a background check. This is not the Texas we want to raise our families in.”

CATITX was joined by another state gun rights group, Open Carry Tarrant County, and both made visits to lawmakers’ offices to pump the flesh in voicing support for pro-gun bills pending this session. According to OCTC leader, Kory Watkins, these visits overall were a success.

“Great work done today by gun activists all over Texas,” Watkins told Guns.com. “The work we put in is paying off.”

However, one visit in particular, to Texas House Rep. Poncho Nevárez (D), turned tense when Nevarez asked the activists to leave his office, threatening to call security after one of the visitors called him a tyrant.

“You can walk outside now,” Nevarez is heard saying. “You’re not welcome here.”

The heated exchange, captured on video, brought immediate condemnation from gun control groups to include Moms Demand Action and the Coalition to Stop Gun Violence who called the interaction, ” [A]n attempt to coerce policy through intimidation.”

Further CSGV compared the gun rights group to Shays’s Rebels, named after Daniel Shays of Massachusetts, a former captain in the Continental Army who inspired an armed attempt to overthrow the government in 1787.

In his defense, Watkins – who was involved in the incident and posted the video which was parroted by the gun control groups – told Guns.com that Nevarez, “Was very rude and I politely told him what I thought.”

The 84th Texas Legislative session is set to run until June 1.