Cody Wilson on Ghost Gunner use at Texas Capitol (VIDEO) 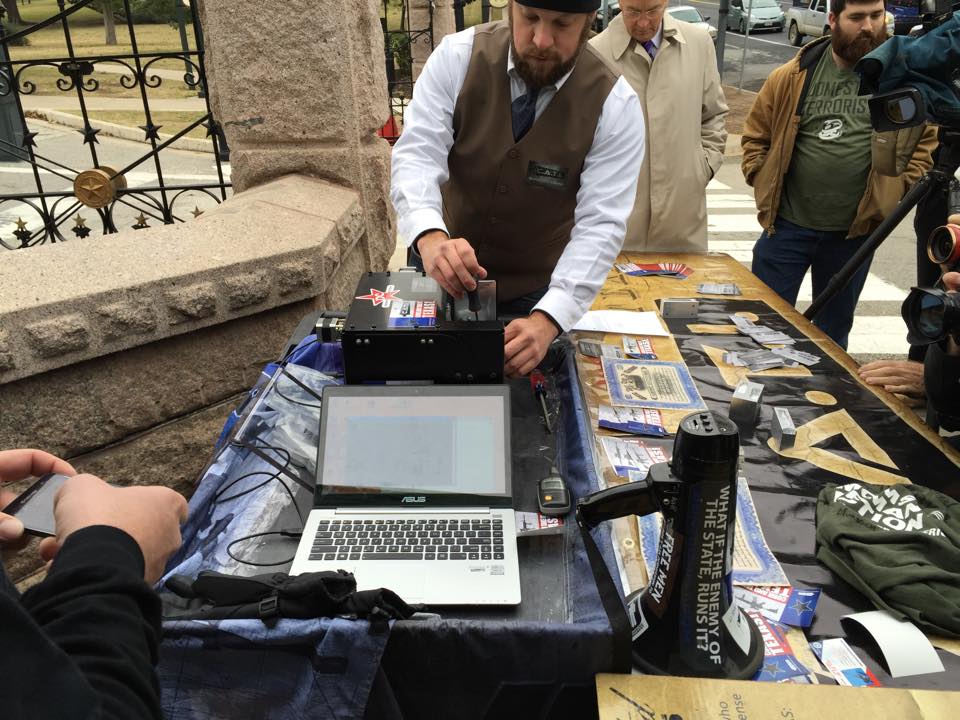 One of Cody Wilson’s Ghost Gunner portable CNC machines, provided through his company Defense Distributed, produced two working AR-15 lowers from 80 percent blanks this week in a demonstration at the Texas Capitol. (Photo: Come And Take It Texas)

The inventor of the 3D printed firearm, Cody Wilson, spoke with Guns.com about the use of Defense Distrubuted’s Ghost Gunner to make AR-15 lowers on the Capitol steps this week.

The machine was used by a gun rights group, Come And Take It Texas, at an event scheduled Tuesday to coincide with the opening of the state legislature’s 84th Session in Austin. As pro-gun activists visited lawmaker’s offices, the Ghost Gunner CNC machine was busy milling 80 percent lower blanks into functional AR-15 receivers.  The group had utilized the first Ghost Gunner released from DD, in their construction efforts that reportedly completed two guns.

“I thought CATI demonstrated the machine, and presented themselves, like men truly jealous of their Liberty,” Wilson told Guns.com Wednesday.

Wilson, who made headlines in 2013 when he created the first 3D-printed handgun, the single-shot Liberator, which was later the subject of a State Department crackdown, is a self-proclaimed anarchist. He has long pushed to decentralize the manufacture of once traditionally produced, government-regulated goods, including firearms and has moved recently into “dark web” technology such as a Bitcoin anonymizer project as well as plans to run for the Bitcoin Foundation board – so he could destroy it.

Wilson feels that the event Tuesday was a success as far as the Ghost Gunner went, saying, “The dirty secret from the day was that the legislators ate it all up. They loved it.”

However, the modern day Proudhon heaped scorn on gun rights organizations not in attendance who voiced sentiments against the planned demonstration beforehand.

“The amount of pearl-clutching the other open carry groups demonstrated in advance of the event was dishonorable and thoroughly middle class,” said Wilson.

With the release of a new Ruling from the Bureau of Alcohol, Tobacco, Firearms and Explosives concerning the legality of the process of making a homemade gun if it involves persons or businesses other than the intended gun owner, the activities at the Capitol walked a fine line.

“As ATF states, ‘There are no restrictions on an individual manufacturing a firearm for personal use, as long as it does not meet the National Firearms Act definition,” firearms industry attorney Joshua Prince told Guns.com. “While that references an individual, the Gun Control Act speaks to a ‘person’ which includes an actual person, as well as, a corporation, society. Accordingly, one can only assume that ATF’s use of the word individual was intended to convey the definition of a person under the GCA.”

Prince elaborated that the ATF’s definition of just what a manufacturer of firearms for trade is can sometimes be a moving target, but in general is confined to a person who makes guns for a livelihood and profit through the sale or distribution of the firearms manufactured.

“In this situation, if the society is making the firearm for itself, and with no intent to sell or make profit from it, such action would not seemingly meet the definition of being ‘engaged in the business,'” said Prince.

Wilson, who declined to elaborate on how many Ghost Gunner devices have been distributed, voiced that with this week’s historic production in Austin, he has reached a milestone.

“As for my own objectives,” he said. “If I can’t get you to stop asking permission from your Government, I can at least demonstrate its overcoming at its front steps.”