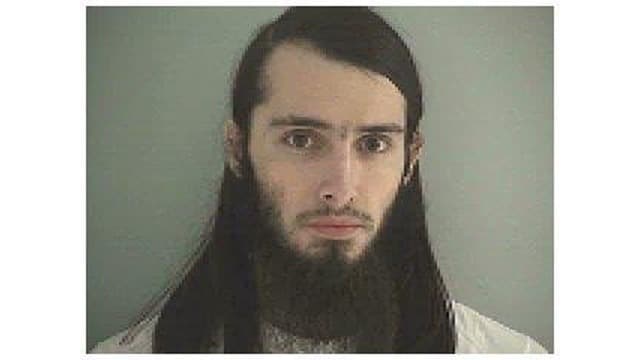 According to the FBI, Christopher Lee Cornell is an ISIS-allied lone wolf terrorist. To his dad, he is a “mommy’s boy” who was set up. (Photo: Butler County Jail)

Apparent Jihadist 20-year-old Christopher Lee Cornell of Green Township, Ohio is jailed after a plot to attack the U.S. Capitol ended when FBI agents sprung a trap set at a local gun store.

Members of the FBI Joint Terrorism Task Force (JTTF) took the unemployed Cornell, who allegedly went by the alias of Raheel Mahrus Ubaydah, into custody Wednesday. He is currently in the Butler County jail under federal charges of attempting to kill officers and employees of the United States and possession of a firearm in furtherance of a crime of violence.

According to court documents, beginning in the summer of 2014 and continuing through until his arrest, Cornell used social media accounts under the Ubaydah alias and posted numerous statements and videos voicing support for foreign terrorist organizations to include ISIL. Further, he voiced support for waging violent jihad and made contact with what he believed to be a like-minded individual who later turned out to be an FBI informant. He advised the informant that he had been in contact with ISIL directly but had not been cleared by the group to conduct an attack. Nevertheless, he elected to pursue a lone wolf strategy.

“I believe that we should just wage jihad under our own orders and plan attacks and everything,” Cornell told the informant as related in the Department of Justice complaint. “I believe we should meet up and make our own group in alliance with the Islamic State here and plan operations ourselves.

Cornell did meet face to face with the informant in October then again in November and further discussed waging jihad. By December, the plan had been formulated to travel to Washington D.C. and attack the U.S. Capitol building with pipe bombs and firearms. After researching how to construct the improvised explosives, the final step before the attack was to acquire the guns.

FBI counter-terrorism agents then set up a sting at an area gun store, Point Blank Range and Gun Shop, and enlisted store personnel to assist them. Then, on Jan. 14, 2015, Cornell came to the shop and purchased two Armalite M-15 5.56mm semi auto rifles, some magazines and 600 rounds of ammunition.

“Nobody knew enough to be scared,” Tom Willingham, president and CEO of Point Blank told the Cincinnati Enquirer. “We knew (law enforcement) was in place.”

Cornell, who had a clean record, passed a National Instant Criminal Background Check System (NICS) inquiry, and buying the firearms with money he had saved, left the store and was taken into custody in the parking lot.

FBI Acting Special Agent in Charge Barrios noted that the public was not in danger during this investigation.

Regardless of the federal complaint, Cornell’s father accuses the FBI of trapping his son.

Gun control groups were quick to blame what they term as ineffective gun laws in Wednesday’s arrest.

“We’re incredibly fortunate that an informant tipped off the FBI about this individual,” wrote the Coalition to Stop Gun Violence.  “If not, weak Ohio gun laws would have allowed him to buy those M-15 rifles and the 600 rounds of ammunition without raising any red flags.”

Cornell is currently being held without bail.