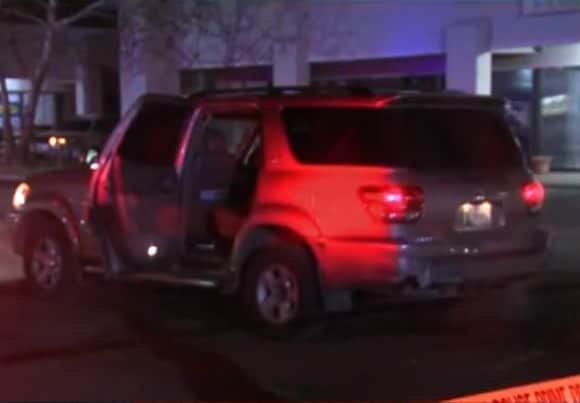 It’s not known why the suspects left the vehicle when they fled, but they soon returned. (Photo: KJRH)

An attempted robbery at a convenience store in Tulsa, Oklahoma, late Tuesday night left two men dead and two more facing multiple charges, including murder for the death of their accomplices.

The store clerk said three men wearing masks and at least two armed with guns entered Ryan’s Convenience Store around 10:30 p.m. Before they could collect any cash, the clerk drew a gun of his own and fired at the suspects. Two of the suspects were hit, while the third suspect took off with a fourth person who was waiting outside, Tulsa World reported.

When police arrived on the scene, one suspect, 27-year-old Brian Powell, was pronounced dead and the second suspect, 16-year-old Kevin Dobbs, was suffering from a gunshot wound. Dobbs was transported to the hospital where he later died.

The remaining suspects left their vehicle behind, but while authorities were still on the scene, the suspects returned and turned themselves in. They were identified as 20-year-old Lakeit Thompson and 17-year-old George Williamson.

When Thompson was arrested, he admitted to authorities his involvement in at least seven robberies over the last six weeks, and indicated that his accomplices were involved as well. Thompson is currently facing six counts of robbery with a firearm, two counts of attempted robbery and two counts of felony murder, in addition to several, less serious charges. He is being held on bonds totaling $550,000.

Williamson is charged with two counts of second-degree murder, one count of attempted robbery, two counts of armed robbery and is being held on bonds totaling $300,000.

Thompson and Williamson both face murder charges for their roles in the commission of a felony which resulted in the deaths of Powell and Dobbs.

Powell had only seven months remaining to complete his probation, which resulted from a prior larceny charge.

The clerk was not injured during the incident and several witnesses supported his account of what transpired. Authorities also recovered two handguns from the scene, believed to have been carried by the suspects.