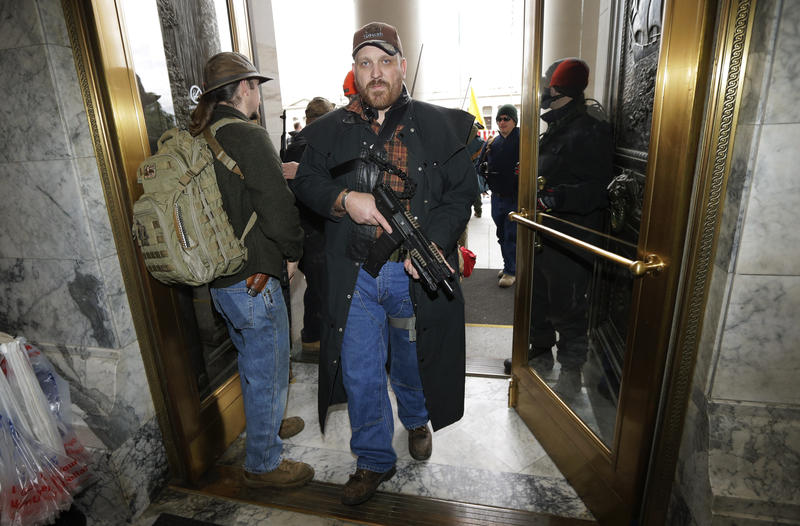 Blaming a rally by a group of legally armed Second Amendment advocates at the state Capitol in Olympia Thursday, Washington’s Lt. Governor ruled Friday that guns are now banned from the chamber.

The rally of some 200 gun rights activists on the steps of the Capitol building Jan. 15, was a continuation of the vocal opposition to the state’s background check ballot referendum, I-594, passed by voters last November. However, when the protest spilled over into the public gallery, there was an altercation between an open carrier and a state police lieutenant that ended with threats of removal and arrest.

The next day, Lt. Gov. Brad Owen (D) who serves as the president of the state Senate, announced a prohibition on the open carry of firearms in the public gallery moving forward.

“I don’t want the people who are on the floor being fearful of doing their job,” Owen told the Seattle Times, stressing that he had the support of both caucuses in the Senate in his move. “I don’t want parents concerned about the safety of their kids as pages.”

The event that led to the ban occurred when State Patrol Lt. Mike Eggleston in the gallery confronted an activist Jason McMillon on Thursday. Eggleston advised McMillion that he was carrying his Rock River LAR-PDS pistol in a “tactical” manner. After threatening McMillion with arrest, the activist, a 20-year military veteran, concealed the firearm.

Eggleston contended that the manner McMillion was carrying his gun was in violation of state law, which prohibits displaying a firearm to “intimidate another or that warrants alarm for the safety of other persons.”

One of the harshest critics of the events behind the crackdown in the state Capitol came from Alan Gottlieb, chair of the Citizens Committee for the Right to Keep and Bear Arms and founder of the Second Amendment Foundation, both of which are headquartered in the state. It is the SAF that is leading the charge against I-594 in the courts.

“This is the result of a few stupid extremists on our side who not only handled their firearms unsafely, but made the hundreds of Second Amendment supporters at the rally look foolish,” Gottlieb told Guns.com. “Irresponsible actions get us bad results. Unfortunately, some of the fools in town are on our side. This kind of childish theater hurts our cause. The gun ban crowd is having a field day over this.”

Gottlieb was largely correct in his final assessment.

Over the weekend, the Coalition to Stop Gun Violence used images from the event published by the Associated Press on their social media page Saturday, labeling the activists, “Insurrectionist thugs.”

This was followed up by a post Sunday from Moms Demand Action, now allied with former New York Mayor Michael Bloomberg, who blamed the National Rifle Association for the event. This stemmed from the fact that NRA lobbyist Brian Judy spoke at the rally on the Capitol’s steps.

“This isn’t your grandparents’ NRA,” read a statement on the Moms’ Facebook page. “Instead of spending their resources on promoting sportsmanship, the NRA cheerleads armed gun extremists who brandish their weapons at statehouses.”

The open carry ban in the Capitol’s gallery is expected to take effect as early as Jan. 19.