The Army should pick this pistol...

I have already expressed my feelings on the Beretta M9 and on the caliber choice for the Army’s new official secondary weapon. Now, here’s the pistol I think they should choose, and why.

Since the military needs to make everything an acronym, they made up the MHS (Modular Handgun System) for this latest pistol trial.  This name suggests decision makers will likely choose a gun with an interchangeable grip, which may prove a challenge to normal line units, who like to have everything the same.  Uniformity is the military way, after all.

While sometimes uniformity annoys me, when it comes to pistols in conventional military units, I think they need to make an effort to keep all the grip sizes the same.  That said, the gun I would go with would have a smaller grip size than the Beretta with the option to add a larger grip adapter.  (Of course, I have just the pistol in mind, but I’ll get to that later.)  Even then, only in the most unusual circumstances should the military add a grip that changes one gun from many others.

Thankfully, the gun I think they should go with has a good grip that will match most every shooter’s hand size.

When dealing with a lot of military troops, keeping things easy and simple is best.  Actually, when dealing with anything tactical, it’s prescribed practice to keep things simple.  Cognitive functioning lowers dramatically under stress.  That’s why I would opt for a weapon with no external safety and no decocking lever. Yep, that means no 1911-style.

Don’t get me wrong.  I am very fond of 1911s, especially when it comes to angle and ergonomics.  But just because I appreciate a gun doesn’t make it the best choice for the entire armed forces. I really like the Glock too, but I wouldn’t opt to go with that gun either for other reasons.

While too many bells and whistles can get ridiculous, it’s important to have a rail on the pistol frame for a light.  Way back when I was carrying the Beretta on a military tactical unit, we put tac lights on our Beretta’s.   Putting on a tac light back then was a pain because the Beretta M9 lacks a picatinny rail.

Having the option to adapt a tactical light is essential to gunfighting.  You have to see what you’re shooting at and sometimes that means illuminating the threat, so when it comes to choosing a military pistol in 2015 or any era, a rail adapter for a light is a must.

When you deal with guns and thousands of people carrying them, unfortunately, there will be accidents. To avoid such mishaps, the training must be of highest quality and the standards of safety must be enforced across the board.  But to also lessen negligent discharges, I’d go with a gun the operator can take apart without having to pull the trigger in order to remove the slide.

I’d stay away from double action only-type pistols, like the Sig DAK.  The Army has several thousand M11’s in their arsenal.  That’s a Sig Sauer P228 DA/SA (basically the P229 as well) and I really like it.  The Sig doesn’t have an external safety, which is good since muzzle awareness and keeping your finger off the trigger should be your safety.

What I don’t like about the DA/SA (the same as the Beretta M9) is that too many people have a hard time shooting accurately with that long trigger pull.  Sure, more training could fix that, but we’ve already been told many troops won’t get that training.  I say (again) just keep it simple: go with the same trigger pull every time, and I don’t mean single action or DAO.  Striker it is.

Accuracy and round placement are essential and more important than “stopping power”. At any rate, target shooting is a lot different than shooting at people.

While handfuls of shooters may be able to do well with the .45 ACP on a static target range, you will find just as many and more who flinch too much at any caliber larger than a .22 LR.  The .40 S&W and the .357 SIG rounds have too much kick for the average shooter, and the Army doesn’t train enough to make expert shooters with secondary weapons.

What’s needed is a happy medium so I’d opt to stay with the 9mm Luger round.  It has enough punch to kill and you can carry more rounds in the magazine.  For war, I’d switch from ball ammo to 147g JHP (more on this subject in a future article because I know there are questions).  The Corbon rounds are good too, and they’re light, which could prove helpful to troops and their already heavy “battle rattle”.

My pick for the army’s new pistol

I know of one gun that has everything I’ve mentioned above—and it’s made in the USA.  If I had to choose the new pistol for the US Army, I’d pick the Smith & Wesson M&P. 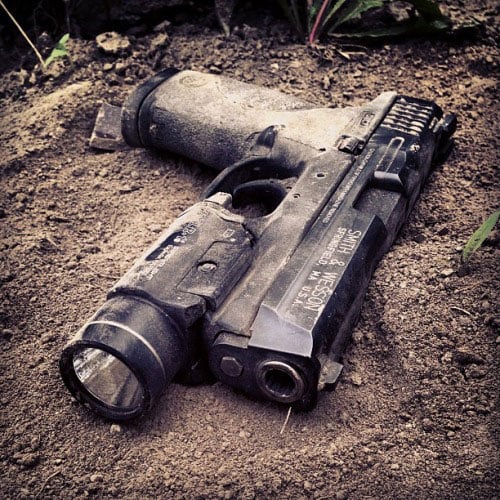 Going with a 9mm will allow the shooter to hold 17 plus one.  The ergonomics are good.  Shooters can disassemble the pistol without having to pull the trigger.  The striker fire is good-to-go, making a consistent, fairly light trigger pull and there’s no external safety or decocking lever to complicate things for shooters under stress.

Plus, like many guns nowadays, it comes with a light rail.  In addition to that, the grip is relatively small–considerably smaller than the Beretta M9.  I don’t think the grip adapters would have to be used much for that gun, which knowing the military uniformity, that’s a good thing.

I can’t foresee a huge amount of training needed to switch troops from the Beretta M9 to the S&W M&P.  The  M&P is simpler and the fundamentals are the same.  But, if I had it my way, there would be more training (like the thumbs forward grip, trigger control, anticipation, grip strength and safe weapons handling) and more repetition drills.  Repetition is, after all, the law of learning.