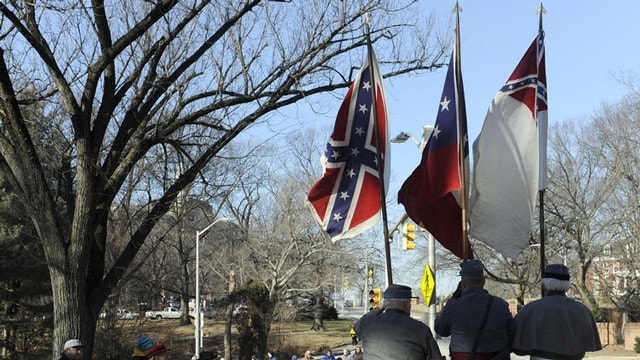 Two groups of protesters clashed in Baltimore over the weekend. One group, clad in Confederate clothing and carrying Confederate flags, was in the park to pay tribute to Robert E. Lee and Stonewall Jackson, while another group stood silently across the street indicating that the tribute wasn’t appropriate on the weekend of Dr. Martin Luther King, Jr.’s birthday.

“I feel like they’re trying to make a point,” said 17-year-old Suraju Kehinde, as she held a sign which said “Change the Date.”

“We get sometimes very inappropriately branded because of what our ancestors did as their duty,” said Jay Barringer, Maryland division commander of the Sons of Confederate Veterans. “We get called racists, and nothing could be further from the truth.”

Barringer said their march was in no way intended to “antagonize” or otherwise cause tension.

“Everyone should be proud of their ancestry,” he said.