The military inquiry came as part of the U.S. Army’s Modular Handgun System competition. The same contest that recently saw the rejection of Beretta’s M9A3 pistol. 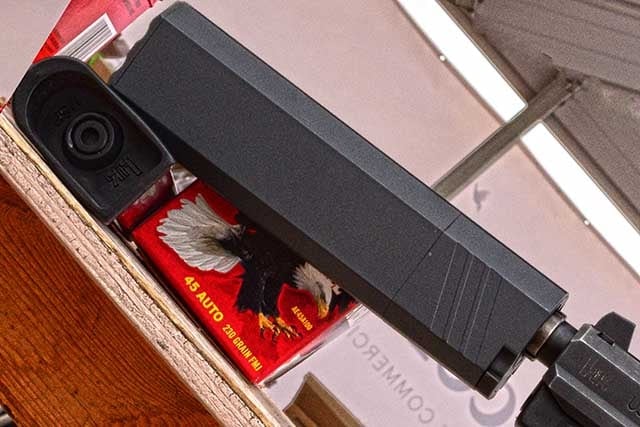 The new SilencerCo Osprey K, no only balances great, but also doesn’t cause hearing damage. Plus it looks awesome. (Photo: Jim Grant)

SilencerCo had the new compact Osprey available for press to try at the Media Day preceding the Shooting Hunting Outdoor Trade Show attached to a HK USP 45, a classic suppressor-host and favorite weapon of special forces worldwide.

Despite its diminutive size, the Osprey 45 K coupled with the full-sized 45 caliber Heckler & Koch pistol was not only very quiet but also pleasant to shoot. The can also didn’t add as much balance-ruining length as other designs, while still retaining good pointability.

The new iteration of the Osprey tips the scales at 8 ounces, while the Octane is slightly heavier at 9.4 ounces. Both designs are shortened by 2 inches. These new designs are further distinguished from their full-sized counterparts by a new dark grey Cerakote finish that reduces glare and visual signature when compared to traditional black anodizing. No price or shipping date have been announced yet.