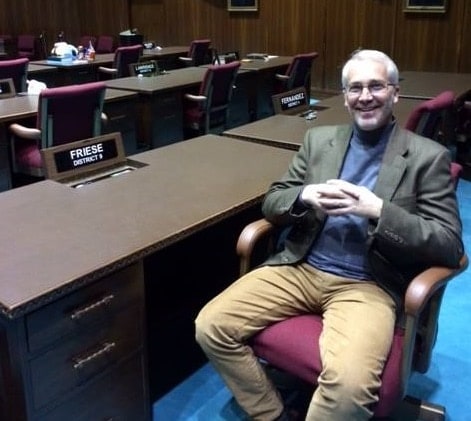 Arizona Rep. Randall Friese (D) wants to end private gun sales without a background check and place limits on gun use by those under 14. (Photo: Facebook)

An Arizona lawmaker has submitted a trio of bills that call for expanded background checks on private gun transfers and limits on firearm use by youth under 14.

The legislation includes two measures, HB 2118 and HCR 2009, that would criminalize the private transfer of firearms by requiring all private transfers to be conducted through a federally licensed firearms dealer (FFL). The third, HB2371, would restrict the use of any autoloading firearm by a shooter under the age of 14 years old.

House Bill 2118 would prohibit the current practice of private gun sales in the Grand Canyon State by legislative action. With few exceptions, it would require that most transfers first go through an FFL who would conduct a background check for which they would be allowed to collect a $20 fee.

Exceptions would include those for military and law enforcement, those loaned a gun for target practice at a shooting range provided it stays on the premises of the range, security guards using company-owned guns and those loaned a firearm by the owner for hunting as long as the owner accompanies them.

Violations of the law, should it take effect, would be considered Class 5 felonies. Under state law this would bring punishments ranging between 6 months and 2.5 years imprisonment.

The companion measure, HCR 2009, uses the same language but would send the question to the voters in the form of a ballot initiative.

State gun rights advocates are circling the wagons against these bills. The Arizona Citizens Defense League sent out a legislative alert Jan. 15 that warned the measures could be a stepping-stone on the way to backdoor gun registration.

“Under the proposed law, if you wish to sell or transfer a firearm, you would first need to surrender your firearm to an FFL who would treat the firearm as if it was an item in their inventory, entering all the information on it, and you, into his records,” read the alert in part.

The proposed legislation is the latest in a series of state laws proposed nationwide after the failure of the Manchin-Toomey expanded background check amendment in 2013. That bi-partisan bill came up short in the U.S. Senate but follow-on measures by state legislatures have been pursued in Massachusetts, New Hampshire and – most recently – Vermont.

No full autos for those under 14

Friese’s final bill, HB2371 would make it a crime for a person under 14 years of age to carry or fire any gun that is “capable of shooting more than one shot automatically, without manual reloading, by single function of the trigger.” Exceptions could be made for young shooters at a range under the control of a firearms instructor or coach.

Youth found with such a gun could face fines of up to $500 and suspension of driving rights until age 18 and the firearm forfeited unless the gun owner can be found. Adults responsible for violations of the law would be guilty of a Class 6 felony, which could bring between four months and two years in prison.

The bill comes only five months after the death of firearms instructor Charles Vacca, 39, of Lake Havasu City, Arizona. Vacca was killed in a tragic accident when a 9-year-old girl he was instructing lost control of a rented UZI submachine gun. However, with the exceptions in the language of HB2371, it is unclear if similar future rentals would be mandated unlawful.

A freshman representative to the Arizona House, Friese picked up his seat last year in a contentious battle with an incumbent Republican. In the lead up to that election, Friese garnered the endorsement of former U.S. Rep Gabrielle Giffords and her husband Captain Mark Kelly, then publicly vowed that “I will stand up to the NRA.”

Friese, who is a trauma doctor, treated Giffords following her 2011 shooting.

In Arizona, the GOP enjoys the trifecta of controlling both chambers of the state legislature by large margins as well as the governor’s mansion, meaning the ultimate passage of Friese’s bill is unlikely without substantial Republican support.

All three of the bills have been referred to the legislative calendar.