Given a major natural disaster, terrorist attack, or even a cataclysmic financial implosion, what are the few things you would stake your life on in a grab-and-go bag?  When it comes to emergency survival, be it wilderness or urban, I believe you can only efficiently carry a certain number of things, so it’s important to choose only the bare essentials.  And those include weapons.

Personally, the first things I want to secure in a survival scenario are items to address my most immediate threats, namely the environment itself.  I want a sleeping bag and a tarp to ward off hypothermia, a water purifier (not tablets) and a water bladder to keep me safely hydrated on the move.  As far as tools go, a blade is paramount.

A fixed blade knife, like this 5″ flat ground 1095 carbon steel RAT-3 from Ontario Knife Company, will most likely be your most important survival weapon.

Folding knives can make worthy low weight additions to any emergency kit, but I find a relatively small fixed blade in a quick-access sheath is optimum for survival situations.  There are a lot of great blades out there, but I really like my RAT-3 from Ontario Knife Company (and their kydex sheath is top notch too).  The blade is 5-inches flat.  It’s made from tough 1095 carbon steel and it has a full tang with a small hole (a lanyard tube) on the butt of the handle.  That hole is great for stringing 550 cord, which you can then use to fasten the knife to any long stick to make a spear. 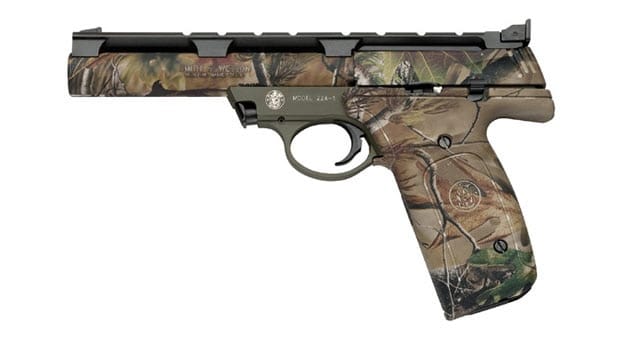 SW Model 22a (here in camo) would make a great semi-automatic survival weapon in combination with a rifle also in .22 LR.

I really want a couple weapon options in case I meet up with some guys who want my shoes or sleeping bag.  Knives are quiet and in the hands of someone trained and willing to use them, they can be extremely lethal.  But they also have serious drawbacks as a means of self-defense namely they require you be within bad breath distance of the attacker.  Which is why I think “emergency survival weapons” means guns.

When it comes to firearms and the light-fighting, traveling survivor, size and weight matter.  Guns are heavy and ammo is even heavier and while firearms are for keeping your distance from the target, ammo runs out.

If I were to choose a gun in this scenario, I’d go with a .22LR handgun and a rifle.  Twenty-two ammo is extremely light and yet still deadly (that is if you can find it anywhere nowadays).  A skilled hunter/marksman could kill small game (and even large game at times) all day long with a .22.  Plus, a .22 can do some damage when it hits the human body too.  It might not kill someone right away or at all, but I doubt they’d stick around and let you shoot them when the rounds start flying their way.

As far as the handgun goes, I’d look at the S&W model 22A.  I prefer the entire slide to move in its entirety on my pistols, but it doesn’t on the 22A.  That said there’s probably not a more reliable .22 pistol out there. 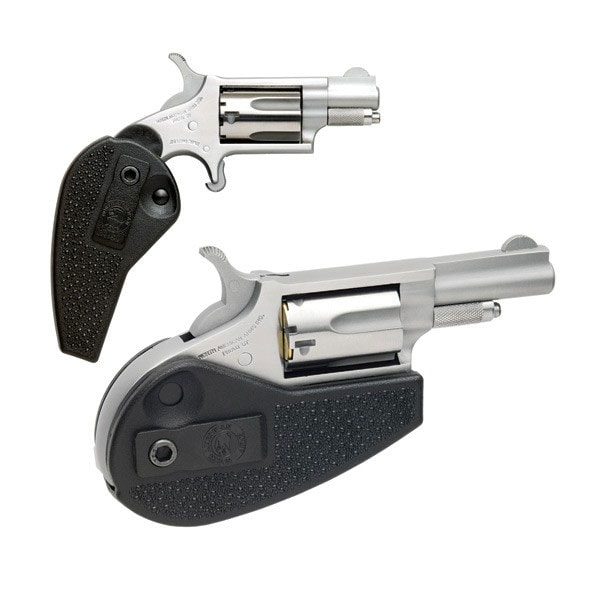 North American Arms 22LR revolver with holster grip. This weapons presents some compromises for survivalists who desire its reliability and concealability in this prep.

The other option is to shoot a .22 revolver.  I’d opt to go with a North American Arms .22 LR with a holster grip.

North American Arms are small and easy to conceal, and revolvers are known for their reliability.  It’s extremely rare that the cylinder timing goes out of whack with revolvers and they are known to shoot every time you pull the trigger, which isn’t always the case with some actions and brands of guns.  The single action on the NAA would help you conserve ammunition, which would be important in a survival situation.  And, the larger grip (on a NAA holster grip) is better for weapon retention.

The downfall of that little revolver is that it’s not very fast to draw and shoot, especially when you have to cock the hammer first.  But that’s something I’d be willing to sacrifice in exchange for the lighter weight of the gun and ammo, as well as its conceal-ability in a survival situation.  As with any short-barreled handgun, they’re difficult to shoot accurately at any distance.  Again, that’s a sacrifice I’d be willing to make, especially since I’d also go with a rifle.

A few years ago Henry Rifles came out with the US Survival rifle an upgrade of the AR7.  That gun is super light.  It can float and you can break it down and carry it in a rolled up sleeping bag.  How cool is that?  You could survive a long time in the wilderness with that rifle.  It could also be relatively useful in an urban survival situation, if needed.  You could shoot stray cats and eat them, for instance.  Isn’t that a tasty thought? 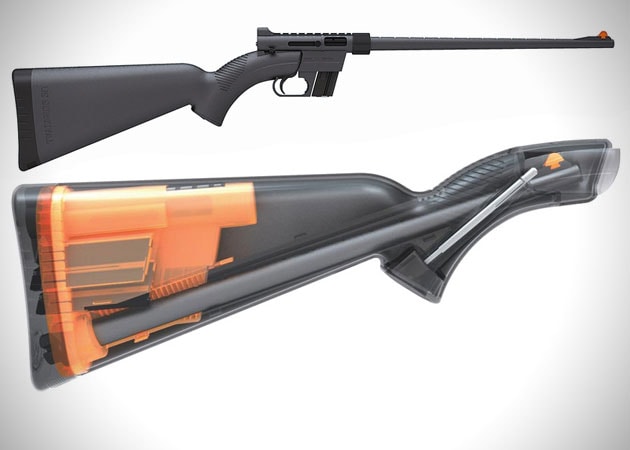 The Henry US Survival rifle breaks down to fit inside the stock and floats.

In the end, survival tools—specifically survival weapons—are important.  Going with a knife is more important and practical than a gun, at least up front.  For one, a blade doubles as a tool and a weapon, and a knife doesn’t run out of ammunition either.  When it comes to a possibly long-term emergency survival situation, where you might be on foot for a while, having a .22LR is likely your best option.  The ammo is light and you can carry more of it.